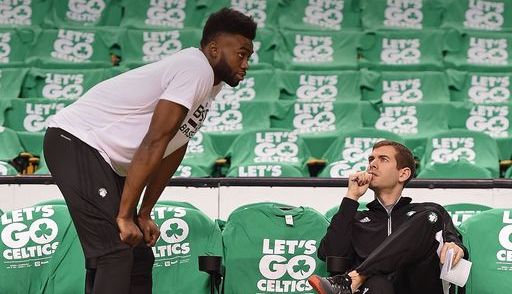 Stevens already confirmed what we already knew. Boston talked to Brooklyn earlier in July and couldn't come to an agreement on a Durant deal. It's safe to assume by the fact that Stevens never denied talking Jaylen Brown's name and instead spoke about how he kept him in the loop, that Jaylen was indeed offered.

Some fans for whatever reason hate when one even brings that up. But I suppose those were the same type of fans that would criticize us when we posted that Rajon Rondo and Ray Allen didn't get along.

Personally I didn't even like the rumored Brown, Derrick White and 1st rounder for Durant offer, but there is nothing wrong with Stevens exploring trades. That's his job. All-Star players have been empowered in recent years to demand out whenever they like, so teams shouldn't feel bad about being proactive.

Here's what Stevens had to say on WEEI:

“Listen, at the end of the day I’m not going to go into any conversations that we had because I don’t think that’s appropriate. But my job is to know what costs are and then ultimately determine whether or not we want to be involved in any deal with any team around the league.

"You say it’s been busy and there’s been a lot of talk but it hasn’t been from me. Hopefully, it gave everyone something to talk about. It’s been pretty quiet on our front for a while now.”

When asked if Stevens had been communicating with Jaylen the past two months, Stevens replied, "Of course."

"Jaylen’s been through this from the standpoint of listening and the noise has been around him for a long time, big names over the years. I think one of the things you have to be able to do is ignore the noise and know what’s important. Also, be able to reach out and have candid and transparent communications with the people involved.

"We’ve had those and been very open from the get-go as all of this has been going on for any of our guys. I sat down with Jaylen last week in LA. He looked great and he will be back to Boston soon.”

It wouldn't be surprising if Stevens never talked to the Nets after signing Malcolm Brogdon (or after their largest TPE expired) in July based on Stevens' answers yesterday. And it wouldn't be an assumption to think that Brad talked to Jaylen and/or his agency after the "SMH" tweet to let him know nothing was up and it's just the business.

I believe it was Mark Murphy who pretty quickly reported after the SMH tweet that Jaylen understands the business and is not unhappy. That probably occurred after Brad had just communicated with Jaylen.

Looking like Kyrie Irving will be teaming up with Jaylen Brown at Kanye West's Donda Sports https://t.co/0LJhKuPHJx pic.twitter.com/PYRqwRfl0l