What the Hell Happened to...Celtics Fans? 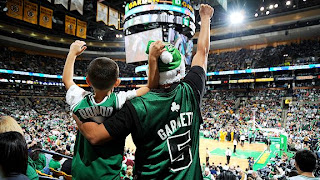 As many of you know my feature column on here is What the Hell Happened To, a sometimes wry and sardonic walk down memory lane on some of the less familiar Celtics of all time.  So those of you who think this is a sarcastic piece, please realize it's not: it's totally serious.

Having followed the Celtics passionately for the past 25+ years, I feel it's crystal-clear that Celtics fans today are a whole lot different than Celtics fans back in the 80s and early 90s.  [Please note this is a general assumption and certainly doesn't apply to each and every Celtics fan today].  The question that's been spurning me for quite some time is, what the hell happened to the Celtics' fans that I remember?

Back when I was growing up there was a swagger that the Celtics and their fans' had.  They always found a way to win.  They were the most successful franchise in NBA history.  Their players always had a knack for the remarkable.  Divine-intervention whether it was a steal by Gerald Henderson or Larry Bird.  A ball that bounced the right way for Don Nelson.  Winning a title and getting the #2 overall pick.

The Celtics have been back in contention since KG and Allen arrived but unfortunately only won one title.  It's inevitable to me that the Enemy is also going to pass the Celtics' soon enough in all-time championships.  The Lakers got Steve Nash and Antawn Jamison this summer, filling their two positions of biggest need.  They lost no one of any significance.  The Celtics have added Jason Terry and a few rookies.  And yeah they lost Ray Allen.  It kills me that the Lakers continue to acquire big-time players (Nash, Pau Gasol a couple years ago) with giving up late first round picks that assuredly amount to nothing.  Meanwhile the Celtics, who should be in a balls-to-the-wall, win-now mode, draft JaJuan Johnson, Jarred Sullinger and Fab Melo with their 3 first round picks the past two seasons.  Draft picks are more valuable before they're used.  It's very rare a rookie makes a big-enough impact to win a title.  Why are the Celtics adding young guys when KG and Pierce are two of their 3 best players and will be retired soon?  Credit Mitch Kupchak and the Lakers for realizing this with his team and making a strong push now.  As it stands, lal is closer to winning another title this year than our beloved Celtics (yet again, which has been the case every season since 1986 except arguably for 1991 and 2005 and 2008.)

Why did the Celtics re-sign Brandon Bass and overpay for Jeff Green when anyone with a television set knows that rebounding was the Celtics' biggest weakness?  It's what killed their chances in 2010 and the two years since.  So the Celtics sign Bass and Green, when guys like Elton Brand, Marcus Camby, Louis Scola, and Chris Kaman were all available?  Did you know how many rebounds Jeff Green averaged in his time in Boston?  If not, read this article and proceed to be amazed.

Maybe it's me getting old and crotchety.  But I genuinely feel that the majority of today's fans' are pleased with a trip to the playoffs and a couple of competitive series.  2010 wasn't that big a deal to them. This past year was a great success.

Hello, this is the Boston Celtics, the NY Yankees of basketball, the team that won 16 of the first 40 NBA championships.  Sure things like expansion teams in Florida and major media markets like NY, LA and Chicago have hurt Boston.  But I feel why are Celtics fans in general content about this off season so far?  Since when was making the ECF an accomplishment?  What the hell has happened to Celtics' followers?  Has complacency set in?  Is it unrealistic to think the Celtics can compete with La or Miami or NY or Chicago?  Is it me or has this offseason been awful since the Celtics are definitely not any closer to winning a title which is the only thing that matters?

For me Celtics' seasons are either good or bad and that's based on whether they win it all or not.  I've been a part of 1 good year in the past 25.  Yes there's some other seasons that are a bit more memorable (1991 and 2002 are two for me) but at the end of the day they were failures.  So I want to get a pulse on Celtics nation to settle this once and for all, so please vote and feel free to rip me for not being a "real fan" respond in the comments below.