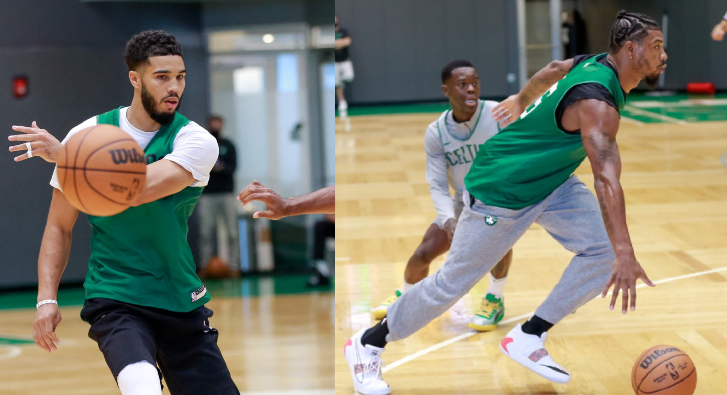 For those frustrated by the Celtics ever-changing starting line-ups the past few years, new head coach Ime Udoka says his plan is not to tinker with the starting 5. He will decide on a group by the final preseason game and stick with that.

Ime Udoka not a big fan of "plug-in" starting lineups. Says he'll determine a regular SL, with what takes the floor in final exhibition game in Miami the likely combo. Don't read too much into who he starts Monday.

Honestly, I don't think this is much of a deviation from what Stevens did as coach. It was simply an issue of players missing games due to injuries or COVID that caused the inconsistency in his starting 5's. Add in the team's desire not to have Kemba Walker play in the back end of back-to-backs last season and Brad never had a shot to see the same 5 night after night.

Kemba is gone, but it's also a bit of wishful thinking on Udoka's part to expect the Celtics not to have starters have to miss games due to injuries or COVID this year. And I may be wrong, but I believe Josh Richardson isn't vaccinated, so expect to miss games.

Udoka could always decide to start both bigs, Time Lord and Horford, with the Jay's and Smart, but that would be a mistake. Stevens had to do that last year for most of the first half of the season with Tristan Thompson and Daniel Theis, and playing two bigs together simply doesn't work in the modern NBA. Maybe for stretches off the bench, but starting two bigs would be giving the team an unnecessary handicap.

Personally I think the ideal starting line-up with this group as it currently stands would be the Jayson Tatum, Jaylen Brown, Pritchard, Time Lord, and Smart. Then Horford, Richardson, Schroder, and Nesmith come in as the second unit, while one of the Jay's plays with them. You can stagger these subs a bit, so that the Jay that will play with the 2nd unit gets a quick breather prior to being reinserted into the game.

Guess here is that if he's healthy, Udoka will start Horford out of the gate.