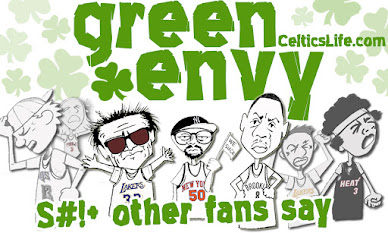 The Boston Celtics got back to winning basketball games after a short pitstop.  Today's win came against the very hot Phoenix Suns. Suns fans are uhhh...a weird bunch lol. I'll leave this screenshot of their pre-game thread message to show you what I mean. 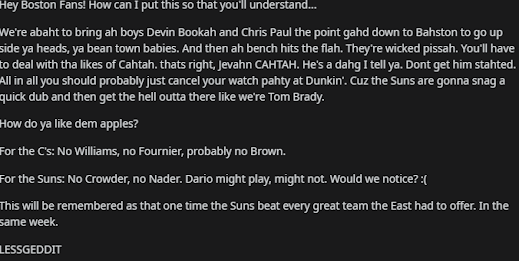 Charming, eh? Either way, let's get to the salt.
I should've stopped reading after "Hey Boston fans"
Book, please lay off the cod and miss jenner.
Lol Tristan Thompson talking shit.. man what a day.
I’d be pissed if I was with the ugliest kardashian too
Very fitting to miss a wide open 3 as time expired.
Celtics fans are still so salty about Book’s 70 point game lol (Man 70 in a loss shouldn't be revered the way you guys do, that's all)
Fuck Tristan Thompson, his bumass won’t be in the league (...if?)
Celtics are some flopping ass bitches
Too little too late Mikal :(
-Poor guy playing one thousand minutes, Monty said no leaving until you make one
Oh dont start driving now, games over.
We'll shoot another stupid three next possession. (He called it)
I feel bad for anyone who took a shot every time the Suns bricked a 3 tonight.
-Don't feel bad. They probably blacked out in the second quarter before they got to see more of this shitshow lol
The refs suck as usual, but they're easily the least important reason we're losing tonight. We just played like complete fucking garbage.
Kemba playing dirty. I mean even Harden doesnt flop this...okay yeah he does.
CP3 needs to just take over. I’m willing to lose this game if he just says fuck it I’m chucking.
Kemba picked tonight to have an out of body experience
Suns don't just go cold from three they go subzero
I can’t stand that flopping bitch Kemba Walker
That's not defense. Marcus Smart teaching him how to play like a bitch
Booker fouled out
KENDALL JENNER THIS IS ALL YOUR FUCKING FAULT
Soft ass flopping against book all game
Kemba is an Embiid level bitch
Well at least a loss today basically guarantees a win against Brooklyn ain’t no chance we lose 2 in a row
Is this a sign that Jae Crowder is a big factor than we realize?
-Let's not get crazy now
There's nothing more frustrating this year than these games where we are inexcusably atrocious from 3 yet keep chucking them all game long.
4/30 from 3 what the fuck lol
I nominate the Suns to the make a 3 challenge and the refs to the stop calling shit on us challenge
This is sick. Our team is dying.
Hey it’s book, long time no see
-aaaaaaaaaaaaand there he goes........
Payton Bitchard
We couldn’t hit the g spot on a 40lb pussy tonight, let alone a 3 ball
Man this might be the most painful game to watch so far this season
If I were the Suns, I simply would not shoot 12.5% from 3
Hope Dario will be noticeable today, or we can play some Frank or Jalen
I have 0 confidence when Dario gets the ball on offense. I expect him to get blocked 95% of the time
Enough of the 2 for 1s. We are 0-100 in them
Man the Suns are gonna have a brand new house built after this game with all the bricks we’re putting out there.
Celtics commentators making excuses for us. That's making feel even worse haha
God I would hate to have Jabari Parker on my team, what a clueless basketball player
Flopabook is the new hackashack smh
We're really losing to Tristan Thompson picks and orebs
I smell a dubble yew.
Holy fuck refs
Yah bench is definitely playing wicked pissah
Some of the refs in this league are out of their minds
Well that was grooooooss.
I went to the bah but I walked through ah time portahl and it’s 2018
Kemba been eh all year, so it figures that he’d do this to us
Is that kemba walker or Allen iverson out there
We need to learn this whole flailing thing
Bahston Celtics? More like Suckits (This was horrendous)
Tristan Thompson calling another player trash lmao
MAKE FLOPPING A TECHINCAL
9 free throw attempts. Playing 8 against 5 is gonna be tough to win guys, we tried though.