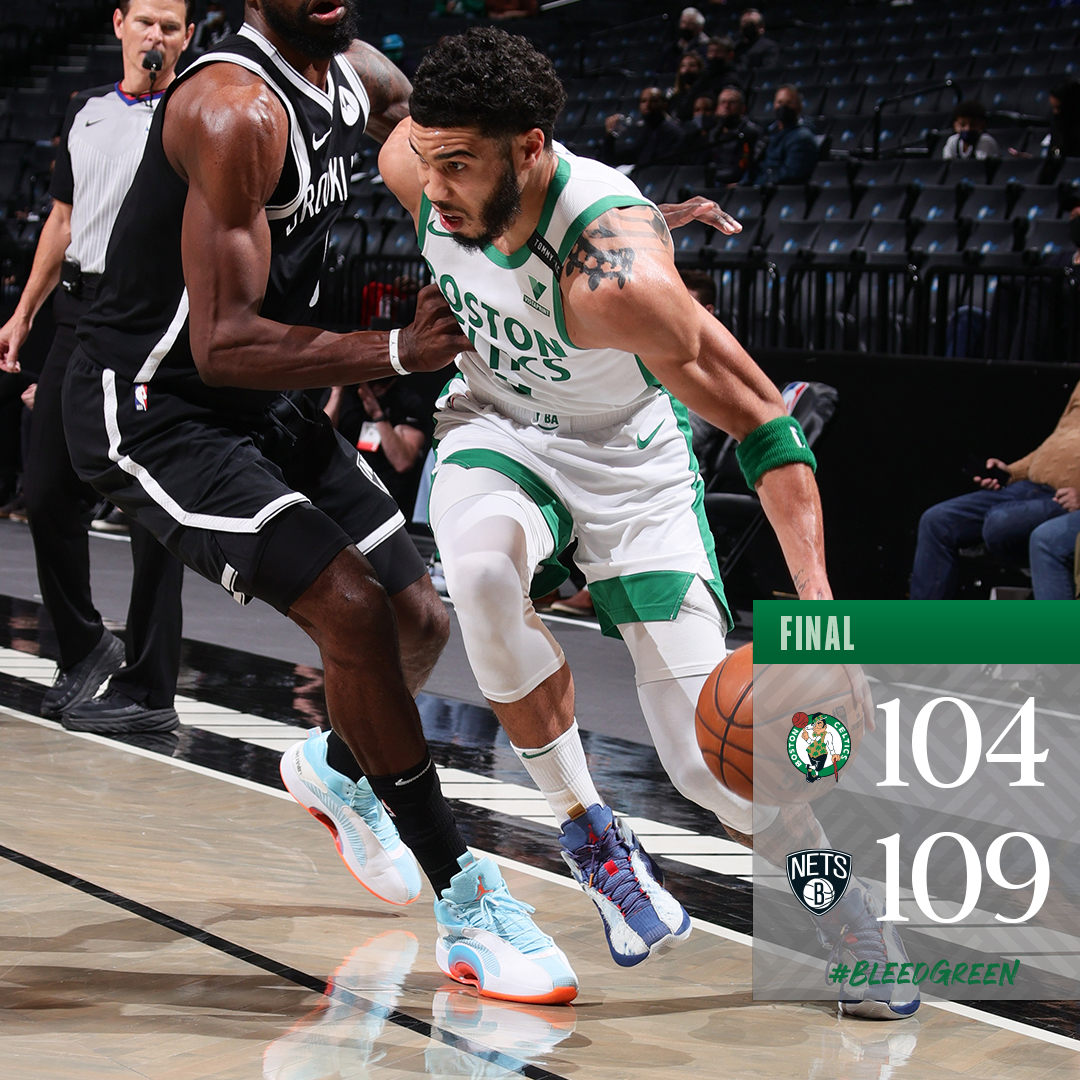 Jayson Tatum's 38 points and 10 rebounds were not enough on Friday as the 1st place Nets held on to defeat the Celtics 109-104 in Brooklyn. The Celtics were playing without three starters in Jaylen Brown, Kemba Walker, and Robert Williams, while the Nets were without both James harden and Kevin Durant. That made tonight the battle of former teammates Tatum and Kyrie Irving.

For his part Irving actually had a poor game, shooting a brutal 4 of 19 from the field. He did end up with a near triple double by adding 11 assists and 9 rebounds, but overall he had a +/- of -10 for the game. He was helped by his teammates. Joe Harris, Blake Griffin, Bruce Brown, deAndre Jordan, and another former Celtics in Jeff Green all pitched in. The Nets built up a sizable lead after strong 2nd and 3rd quarters on their end.

Evan Fournier made his return from his Covid-19 bout, but in 22 minutes we got the Fournier that showed up to Boston missing all his shots in his first game and not the red hot shooting Fournier we last saw. He did collect some assists, and obviously his shot will return. Just odd to see another goos egg out of him.

The Celtics wouldn't have had a shot down the stretch if it wasn't for rookie Payton Pritchard. Pritchard seems to have broken through the rookie wall and had one of if not his best shooting games in green (Of course even though the Celtics are on the road they wore one of their alternate white jerseys) hitting 6 of 7 3-pointers. The rook finished with 22 points. But with three starters out and Fournier not being able to hit water from the ocean, the Celtics needed more. Marcus Smart added 19 points, but no one else even hit double figures.

Evan Fournier says he could've waited another couple of games before returning from Health & Safety Protocols, but he wanted to get back because he needs time on the court with his new team.

Brad Stevens said Evan Fournier felt pretty winded out there after his long layoff. Stevens is pretty sure Fournier won’t have many shooting nights like that.

The playoffs are just about a month away for the @celtics, so who's going to make it into the rotation?
Find out in my latest article on @celticslife!https://t.co/voFHbEpIxI