Did Bradley Beal just complete step 1 of the "Get traded to the team of your choice" program? 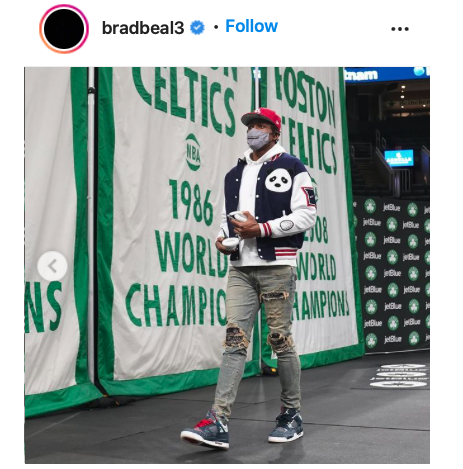 Oh no biggie. After posting pics of Jayson Tatum and himself yesterday for the former's birthday, Bradley Beal just casually this afternoon made his latest Instagram post a couple pics of him with the Celtics banners in the background.

Now it could mean nothing, but I doubt that. Beal is smart enough to know what he's doing. And it's not like he posted these on Sunday when the Wizards were in Boston. Not even like the Celtics were the last team he's played (The Wizards played Memphis on Tuesday and host the Clippers tonight). Beal just wanted to post a pic of him with the Celtics banners in the background. Imagine if Tatum was a soon to be free agent and did this with the Wizards banners? Obviously it can only be imagined, though I do think the Bullets might have at least one title from the Wes Unseld 70's. But anyway, Boston fans would go nuts if Tatum did that. So this isn't nothing.

Still a long way to go before Beal completes one of the last steps, which is of course wearing a "That's All Folks" tee to a game you're sitting out. But I'm guessing this will become a story. And considering that the Celtics don't really have the assets anymore to trade for Beal without giving up a Jay, then you kind of need him to push/force his way to Boston. It has to be a situation where Beal and his agent make it known that he will walk as a free agent and sign with Boston. And if you trade me anywhere else I'll still walk and sign with Boston.

But even that has issues. The Lakers with Anthony Davis had just collected a bunch of high lottery picks from sucking the years prior. So they had a great young piece in Brandon Ingram to headline a deal. Plus Lonzo Ball who has also very recently been a #2 overall pick. And they kicked in Josh Hart and a ton of 1st rounders.

Beal shouldn't cost as much as Davis since AD was a bit younger at the time and considered top player in the league with unique abilities for a big man, but even with that in mind it's going to be hard for Ainge to get this done. He will need one of our young guys like Time Lord or Pritchard to make a leap I'm guessing. Smart and multiple 1st rounders won't get you Beal. The Wizards are going to want high lottery picks or very young potential future All-Stars. But you can't get to step 10 before step 1, so today we can celebrate this minor victory. Jayson Tatum gets his wish and will have Bradley Beal as his teammate, but "Mr Under Appreciated" Jaylen Brown will be wearing the opposing team's uni: https://t.co/PPKSxKjO63 pic.twitter.com/HC7wYhv4tE