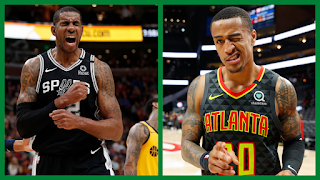 Shams Charania of the Athletic reported this morning that the Boston Celtics were interested in trading for John Collins of the Atlanta Hawks and LaMarcus Aldridge of the San Antonio Spurs. Obviously this is only a rumor, which fans must be wary of as the March 25th Trade Deadline approaches, and GMs throw out smokescreen rumors to distract rival GMs from their true intentions. What’s interesting about Collins and Aldridge is that the two players are entirely different, and while they technically (sort of) play the same position, they are at entirely different stages in their careers.
Collins would be a dream acquisition for the Celtics, as he’s only 23 years old, and is averaging 18 points and 8 rebounds per game this season. Last year, he averaged 21.5 and 10 for the Hawks, but has struggled this season along with the rest of the Hawks roster. Collins is listed at 6’9”, but is capable of playing as a small-ball center or the power forward position. He’s best suited as a situational center, but he’s shown great potential in his NBA career thus far. Collins will be a restricted free agent this offseason, and Shams reported that he’s looking for an annual deal in the $25 million range. Before this season started, it was reported that Collins turned down a $90+ million extension offer from the Hawks, so it appears Collins is betting on himself to receive more this offseason.

The Boston Celtics have shown interest in John Collins, per @ShamsCharania pic.twitter.com/4HjUhREL3i

To acquire Collins, it would take a “high-level first-round draft pick and/or a talented young player.” What’s difficult about trading for Collins is that he only makes around $4 million this season under his rookie contract, so matching salaries requires a young, cheap, but also good, asset to be traded in return. Collins and star teammate Trae Young have had their chemistry issues while in Atlanta, and the Hawks clearly seem to be building around Young, so Collins might be the odd man out. It would still take a high quality offer to acquire Collins, as young big men of his caliber aren’t often available.

If I were Danny Ainge, I would absolutely be calling the Hawks front office to see if Collins is legitimately on the trade block. However, I’m not Danny Ainge, and as a Celtics fan, I don’t want to get my hopes up. In my opinion, it would take one of the Celtics’ young pieces and at least one first round pick to trade for Collins. This is a steep price to get a player who could technically leave as a restricted free agent this offseason should the Celtics decide to not match a rival offer, but Collins could fit in perfectly with Kemba and the Jays. The Celtics don’t have any young players on rookie contracts of Collins’ caliber, and so it shouldn’t hurt too badly to trade Aaron Nesmith, Romeo Langford, or Payton Pritchard. I’d consider Rob Williams off the table for any trades with Atlanta as they already have Clint Capela manning the center position, who essentially plays like a more experienced Rob Williams already.
The Hawks will have multiple suitors should they opt to trade Collins, and it’s been reported that the Minnesota Timberwolves would love to add Collins to their team. Should Collins become available, Celtics fans should be willing to pay the price to acquire him.
Next up, regarding the LaMarcus Aldridge rumors, this one really confused me. While Aldridge is a well-known player and a seven time All-Star, he’s clearly past his prime. I don’t see how a 35 year old Aldridge brings more to the table than Rob Williams, Tristan Thompson, or Daniel Theis. Now sure, if one of these three bigs were traded in another deal, I could understand bringing in Aldridge should he be bought out by the Spurs. However, Aldridge is only averaging 13.7 points and 4.5 rebounds per game this year, his lowest numbers since his rookie season. Aldridge is still a capable big man, but he doesn’t really fit with how the Celtics play. He’s a capable defensive player, but not a great one, and he’s shooting 36% from three this season on 3.5 attempts per game.

I'm not fully understanding why Boston would be pushing for LaMarcus Aldridge. It's not that he couldn't help, but I don't see the fit in Boston. Especially when Brad Stevens just said the team is likely going away from two-big lineups. Maybe if one of the current bigs is traded?

Back on March 10th, the Spurs announced that Aldridge and the Spurs had “mutually agreed to part ways.” This is a pretty clear indication that Aldridge will not be with the Spurs beyond the Trade Deadline, but it doesn’t necessarily do much to improve his trade value. Furthermore, Aldridge will be making a steep $24 million this season, which is a pricy number for a 14-5 player. I see Aldridge as a prime buyout candidate around the league, but again I don’t think he makes much sense on the Celtics, barring a trade involving one of their current big men. It’s been reported that along with the Celtics, the Lakers, Heat, Trail Blazers are all suitors for Aldridge. This competition will be tough, as the Lakers are an appealing team as the defending champions, and the allure of going back to where his career started in Portland should also appeal to Aldridge.
Like I said, this time of the year is peak rumor season, so take everything you read on Twitter in the coming days with a grain of salt until something concrete happens. Here’s to hoping that if something concrete does occur, it benefits the Celtics.