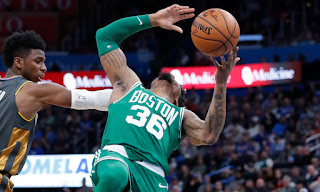 To preface this blog post, these thoughts are mine and mine alone. I recognize that after a miserable week for the Celtics, I’m probably more worn out and overly critical of the Celtics. However, I can’t help but feel like the flopping and complaining about not receiving foul calls has occurred with increased frequency as of late. Flopping and complaining is annoying when your team wins, but it’s unbearable when they lose.
I understand that the NBA has slowly been transitioning away from the gritty, grind-it-out style of play, and towards skilled and high-scoring offensive games. They’ve eliminated hand-checking on defense for a number of seasons now, and NBA referees have called fouls on players defending jump shooters with greater frequency. I can understand that the NBA made these changes to benefit the offensive production and protect players on that end, and it is working. As of February 16th, there are currently 33 players in the league averaging more than 20 points per game, which is an absurd statistic. On Sunday, the number of players averaging over 20 ppg was at 41, which was a league record, so the offense is flowing. I’m not advising that we devolve back to the days where Larry Bird and Dr. J would literally punch each other, but I can’t help but think that there has to be a comfortable middle ground between now and then. 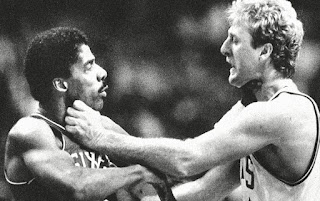 It feels like more than ever, players in the NBA are driving to the paint or throwing up a shot from thirty feet away not with the intention to score, but with the hope to be fouled. We saw it cost the Warriors the game last week against the Spurs, as Draymond Green threw up a “shot” from the logo, thinking he could suck the defender into his airspace and receive a call. No disrespect to Draymond Green, but this is a gamble you should not be taking when you’re only shooting 68% from the free-throw line on the season. Plus, Green should recognize that he has Steph Curry on your team, who is having an MVP caliber season and is the widely regarded greatest shooter of all time.

One of the Warriors’ worst losses of the season ends in a blunder. Draymond Green, down three, thought Spurs were coming to foul him. They didn’t and he chucked a 40-footer off the backboard with five seconds left. pic.twitter.com/E97E2E4SGG

The NBA implemented an anti-flopping rule during the 2012-13 season to try and eliminate this foul-drawing tactic. Players are warned for the first offense, fined $5,000 for the second offense, $10,000 for the third, $15,000 for the fourth and $30,000 for the fifth offense. Six plus warnings can result in an increased fine or even a suspension, but to my knowledge, no one has ever reached six warnings in a season.
LeBron “I don’t flop” James and Kyle Kuzma were both issued warnings for February 12th violations, so it is a league-wide issue. Regarding the Celtics, Marcus Smart is a notorious flopper, and he’s been warned multiple times throughout his career. Smart’s a great player and has been out with injury during the Celtics’ recent skid, but like I said, flopping is annoying when your team wins and it’s unbearable when they lose.

I don’t see any way how the NBA can fix this issue midseason, but I hope that Brad Stevens can talk to his team about their continued flopping and complaining. I can fully acknowledge that Jayson Tatum and Jaylen Brown don’t receive the superstar calls that James Harden and LeBron James do, but I think that this is a separate issue. As a superstar on the Celtics, you should still be actively trying to finish through contact, not chucking up a shot at the slightest touch. I saw floating around on Twitter last week the idea that the Celtics bring in Kevin Garnett as an assistant to whip the Celtics into shape. While Garnett praised the current direction that the game was going in, I can’t help but think that he’d also eliminate some of the complaining and soft play that the Celtics have fallen into as of late, though him being a legitimate assistant is a long shot at best.
With that being said, I hope that the Celtics can pull it together tonight against the Nuggets, and that greener pastures are ahead. Hopefully those pastures include less complaining and flopping, and more battle-hardened gameplay that Boston fans have love and expect from our teams.
Marcus Smart photo courtesy of USA Today
Julius Irving-Larry Bird photo courtesy of NBC Sports