Expect the Celtics to make another run at Dāvis Bertāns 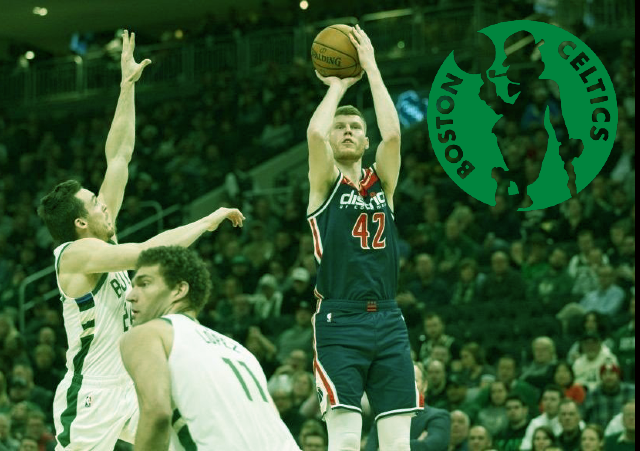 The Celtics were hot for the Latvian Laser Dāvis Bertāns leading up to the NBA trade deadline this past season. Reports were that the Wizards were asking for two first rounders and Ainge decided that was too expensive for a possible rental considering the Celtics likely weren't going to compete for a title last season anyway. Then the pandemic hit in full force, the NBA went on hiatus, and when the dust settled, Ben Simmons got hurt, the Bucks were no longer good, and at one point the Celtics were the favorites to win the title according to oddsmakers.
Would the Celtics have gotten past Miami with Bertāns? I think that is very likely. I think just one more capable rotation player would have done that. Would they have beaten the Lakers? That's a tougher call. The Lakers had to go to six games to put away an injury decimated Heat team which obviously wasn't the same one Boston faced. Might have come down to how close to 100% Kemba Walker and/or Gordon Hayward were for the Finals.
Anyway that's in the past and opening night on the new season is just over 5 weeks away. The NBA Draft is going down this coming week and offseason trade and free agency rumors are in full effect. I know many Celtics fans desperately want a big name addition at the center position, but it takes two to tango. The Jazz aren't just going to give the Celtics Rudy Gobert. Same with the Pacers and Myles Turner. And honestly I think the worry about getting a much better starting center is overblown. If this was 1990 or 2000, or even 2010, I'd be there with you, but the Celtics didn't lose the ECF because Daniel Theis was there starting center. They lost because they had no depth without Hayward and when he returned his injury quickly regressed and once again they were down to a 5 man team and a prayer. Also Theis was battling his own injury.

It's a different game in 2020. Unless the NBA is planning some rule changes, you're more likely to have issues trying to play too many big men (ie. Philly with Embiid and Horford) than to have your rotation be size deficient. Reports are that mMultiple teams have reached out the Washington Wizards about a sign-and-trade for Bertans. It would be very surprising if the Celtics weren't one of those teams, since they were one of if not the most active suitor for the big man at the trade deadline.
Here are Bertrans' career stats courtesy of Basketball Reference:

His eFG% is off the charts. He'll knock down 3 or 4 three pointers a game all the while shooting at over 425 from behind that arc. He's not a banger, rebounder, or rim protector. But again it's not that easy to just find and acquire the perfect modern big man. Also if you've watched NBA recently, most of the time the big men aren’t really banging under the boards for rebounds. They are out on the perimeter either spreading the floor or guarding the opposing big man who's also out they’re spreading the floor.
It's part of the reason you see the rebound numbers going up for guards and forwards. Credit to Jayson Tatum for his rebound numbers in the playoffs, but it wasn't exactly the same as previous Celtics small forwards like Larry Bird or Paul Pierce grabbing a dozen rebounds in a playoff game. They had to battle for each one. Nowadays the shooting team usually just retreats down the court to prevent the transition game. If anyone is going for an offensive rebound it's typically a guard. So a lot of Tatum's rebounds (Or Jaylen's or Smart's, etc) were simply being the guard or wing who grabbed the loose ball off the rim.
This is also why you see so many triple doubles by Russell Westbrook and James Harden. Guys aren't fighting a front court of Patrick Ewing, Charles Oakley and Anthony Mason in the paint for boards. Anyways long story short, having a big that can bang and rebound is not very important or at least not nearly as important as it used to be. The biggest flaw with Bertrans is he's not a rim protector, but you can't have everything. And many of the elite rim protectors can't spread the floor on the opposite end, so their pro balances out with a con.
Ainge is definitely going to take some cuts for the fences this offseason as always. Most of the time, the firework trades don't end up going down. But there are smaller moves the Celtics can make that would still put the atop the Eastern Conference. Signing-and-trading for a Bertrans is one. Going after Aron Baynes, Christian Wood, or Serge Ibaka are others. Might even be able to add two of those four. and then there's also the draft.
I'm definitely not as worried about the Celtics big man rotation as you might be. I think Theis is a quality player and you could win a championship with him as your starting center in 2021 NBA. Kendrick Perkins was still rather raw in 2007-2008 and the team still won a title. And you don't need as good of a center now, nor that traditional type. I also think Robert Williams has potential. Then you add in a couple of the players I mentioned above, or similar types and you have plenty of big man depth. The names might not be sexy, but the cost to get them would be much lower. And the ability to get them is much more likely.
If the Celtics win a title in 2021 it will be more about how top shelf our stars play and how healthy the team is. It's not going to come down to who is playing center.