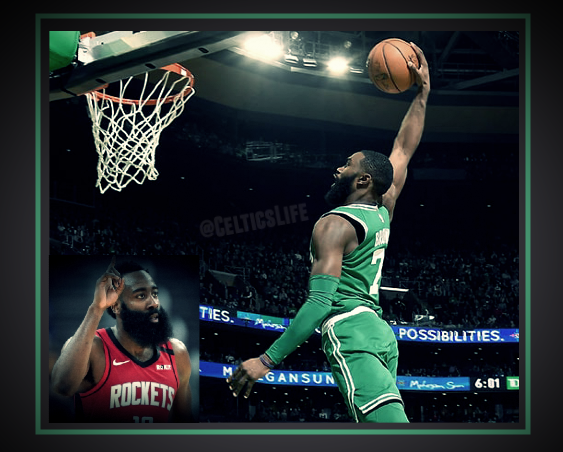 So everyone wants out in Houston. No one seemed happy with their role last season, and despite hiring a new coach and GM, now the complaints are that the stars didn't have a say. Russell Westbrook wants out. And there are rumblings that James Harden does as well. Didn't take long for some trade ideas to pop up. While I give this NESN reporter credit for not just pandering to his readers and saying Brown is untouchable, but I disagree that not wanting to part with Jaylen is "ludicrous."


Former NBA exec Bobby Marks made some waves Thursday when he named the Celtics among the teams that could actually swing a trade for Harden (the Nuggets, Nets, 76ers and Warriors were the others).
Acquiring Harden at the absolute least would require the Celtics sending Jaylen Brown to Houston as part of the package. We’re certain that trading Brown would be a non-starter for some in the fanbase.
That, of course, is ludicrous.


So yes James Harden is a former MVP and still an MVP candidate for the next couple years at least. And I'm well aware that in polls in 2007, 90% of Celtics fans wouldn't trade Al Jefferson for Kevin Garnett. I mean I've heard from Celtics fans on Twitter who wouldn't trade Marcus Smart for Luka Doncic. With that said, this isn't a KG trade. Offensively, Harden is a tremendous player, but he wouldn't transform your team the way prime Kevin Garnett did. He might change the culture defensively, but the opposite to what KG did. Also Jaylen Brown is a better player than Al Jefferson was.
Jaylen Brown's stats his first four seasons in the NBA are quite comparable to Harden's. Harden the better passer and Jaylen the better rebounder. Harden's ppg took off in his 4th season as "the guy" in Houston, but take Kemba Walker, Gordon Hayward, and Jayson Tatum off this past season's Celtics and pretty sure Jaylen could have averaged 5 and a half more points per game. And Jaylen brings it on both sides of the court.
Of course Harden has taken his offensive game to even greater heights in subsequent seasons, but some of that is the Mike D'Antoni effect. Anyone that has played fantasy basketball knows that Mr. Pringles' players have inflated stats. Also, there is zero reason to believe that Jaylen brown has hit his ceiling as a player. 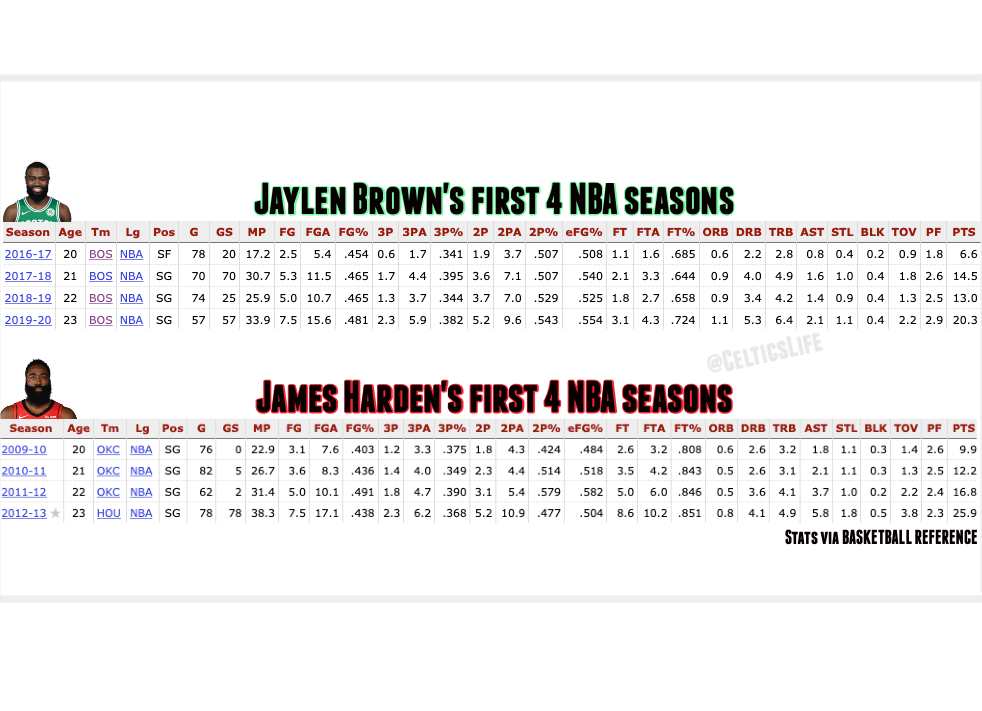 Also would you rather pay James Harden $41 million a year or Jaylen Brown $23 million and be able to use that additional $19 million on an additional player? Are you fine with not being able to afford to retain Marcus Smart when his contract comes up, because you're paying Harden over $47 million for his age 33 season?
Would you rather have a much more expensive, and likely soon to be declining James Harden for his age age 31-40 seasons or a less expensive and only improving Jaylen Brown for his age 24-33 seasons?
We've talked about the defensive downgrade of adding Harden, but also offensively, you'd now have Tatum and Kemba playing almost exclusively off the ball. Two players that have shown they play best with the ball. Tatum too a temporary step back in his game when he had to play off the ball next to a ball dominant Kyrie Irving. And Kemba has had to make adjustments in Boston to not having the ball as much. Swapping Jaylen for Harden would mean you'd get a worse Tatum for one thing and a much worse Kemba.
No, Tatum doesn't need to play second fiddle to an aging star (no matter how good he is right now). Tatum needs a co-pilot who's his same age. Brown fits that bill. Not comparing Jaylen to Scottie Pippen (or Tatum to MJ for that matter), but I'm sure the Bulls could have traded Scottie Pippen in 1989 or 1990 for an amazing vet 7 years older after they kept failing to make the NBA Finals (Dominique Wilkins for example, though he's only 5 years older than Pippen). And that would have been incredibly shortsighted and dumb. Dare I say ludicrous.
So again credit to the NESN writer Logan Mullen for not just tossing red meat to the fan base, but no you're not ludicrous for passing on moving Jaylen Brown here. You're not ludicrous for wanting to make the trade either. I definitely wouldn't, but there is at least some argument that could be made that the Celtics would have a better shot at winning a title this year with Harden over Jaylen. I prefer title contending teams that have longer windows, so there's also that.
What's your take?