Recalling Tommy Heinsohn – and perhaps a bit of my youth 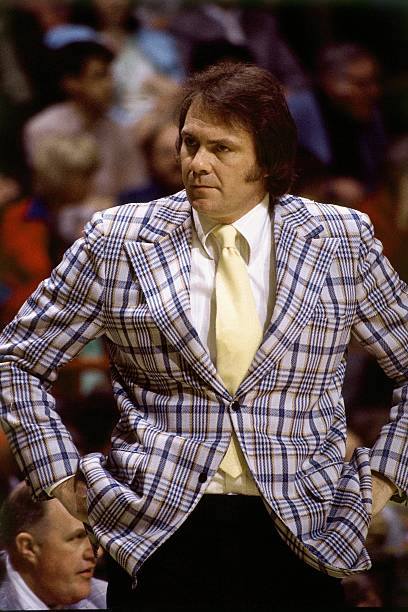 I’m just slightly too young to recall Tommy Heinsohn the ballplayer … an eight-year-old third-grader when the 30-year-old “Ack-Ack” holstered his Tommy Gun for good, the same season Most and Havlicek made each other eternally renowned. 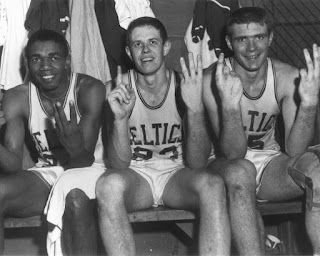 My earliest personal recollection of Mr. Heinsohn is as a broadcaster during Bill Russell’s three-year stint as player-coach. The emergence of independent TV stations – the UHF channels, as they were often called – produced more exposure and revenue for the local teams. Boston’s Channel 56 started televising around 20 regular-season C’s road games (and a handful of playoff tilts, as well), Tommy and his former coach Red Auerbach lending their voices and thoughts to the festivities. In theory, Heinie handled the play-by-play with Red offering commentary. [It’s a shame all that old video seems to have been lost to posterity.]
By the time Tom had slid from the broadcast table to the coach’s seat on the bench, my pals and I were big enough fans and had earned sufficient parental trust to ride the trolley to and from the Garden on Friday nights. We were regulars up in the second balcony from opening night, when High Henry Finkel teased us all with an impressive 21-17 “double-double” in a loss to Cincinnati. Despite the personal milestone, it was a trying season in which the team would never string together more than three consecutive victories, finish 14 games below .500, and miss the playoffs for the first time in two decades. 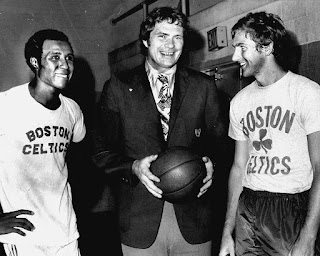 Through the struggle, though, Coach Heinsohn revealed a tendency for innovation. For instance, because of Finkel’s limited athleticism, he lost EVERY “jump-ball” – and a center-jump initiated every quarter of play in those pre-historic times. So Tommy began using second-year jumping-jack Richie Johnson to start each quarter, then subbing in ol’ Hank at the first dead ball. Johnson earned enough of Heinsohn’s confidence to extend those short stints and average 13 minutes in his 65 appearances that season. Alas, the 1970 arrival of Mr. Cowens made Johnson expendable, his career ending after one more season of bouncing around the ABA.
Heinsohn’s coaching ingenuity endured, though. After his Celtics lost Game 6 of the 1974 Finals in double-OT to Kareem’s Bucks … the best basketball game I’ve ever attended … the Celts flip-flopped their defensive strategy (i.e. concede KAJ his points, but shut down everyone else), swarming Jabbar every time he touched the ball in Game 7 at Milwaukee. After averaging 34 PPG on 53% shooting (27 attempts per game) through six games, the big guy was held to 10-for-21 shooting and 26 points in Boston’s title-clinching 102-87 Game 7 triumph. 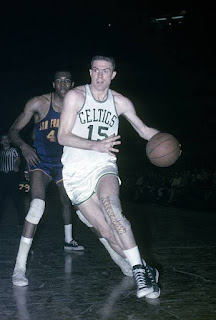 Tommy’s “Good Ship Celtic” began unraveling after the ’76 championship victory. The loss of Paul Silas and Cowens’s infamous sabbatical, followed by a 1977 training camp that featured a Havlicek appendectomy, Jo Jo White foot problems, and a Sidney Wicks holdout, ultimately induced Auerbach to dismiss a burnt-out Heinsohn the first week in January of 1978.
So it was back to the broadcast table for the industrious Heinsohn, enlisted by CBS for its national broadcasts in the early ‘80’s. When David Stern was appointed Commissioner in early 1984, he set out to improve the league’s image, beginning with its presentation on television. His “point man” with the network was none other than our own Tommy Gun.
According to a book entitled The Ultimate Assist, it was Heinsohn who schooled the network people, from the cameramen up to the producers themselves, on how to depict on the TV screen both the “NBA is FANtastic” physical feats of the athletes as well as the intricate “chess game” being waged between the coaches.

Heinsohn compares watching an NBA game to that of watching a magician, explaining that whereas the magician shows you one hand similar to the way the viewers see the ball, the analyst should “let the audience peer into the other hand, to explain what the magician is doing in the hand you aren’t watching … One of the early ideas of how to utilize replays was to take each replay back five seconds from the moment of interest to demonstrate how that play developed.

So don’t be surprised, my friends, if Tom Heinsohn is honored with an unprecedented third enshrinement to the Naismith Hall of Fame, as a contributor to the game – perhaps it might even be in conjunction with the long-overdue recognition of his friend and mentor, Johnny Most.
I imagine there’d be a helluva wing-ding up there in the Celtic corner of heaven.
Abacus Revelation for the Road
A last "Tommy Point" by way of Pluto's Tall Tales:

There was a bonding between the players and the organization because you knew you'd play your career in one town. You could buy a house, put yourkids in school and settle down. You also knew that Red would give a veteran player an extra year when most other teams would have told him to retire or traded him off. But you also trained your replacement -- which was unique in basketball. Ramsey worked with Havlicek. I worked with Satch Sanders...
Red said, "Take him aside, talk to him, teach him."