Boston's TPE is more exciting than you think

Boston’s TPE is more exciting than you think 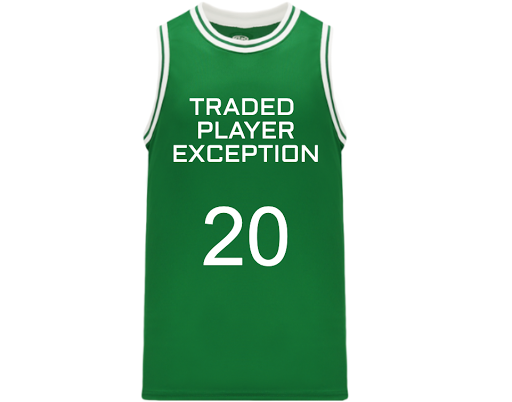 Up front, I just want to say that nothing that's happened this offseason has been remotely surprising to me. I don't say this to gloat. I more say it to reassure fans who may feel blindsided by this or are somehow unhappy with the front office.

For months I had been taking downvotes for saying it made financial sense for Hayward to opt out. Taking 4 years 100 mil in his shoes is far better than 1 year 34 mil in a COVID year. 9 months ago, Pittiv20 was on here literally warning that some mystery team would offer Hayward as high as 4 years 120 mil and that such a situation could result in a S&T.

Even in September when ESPN reported that Hayward was "likely" to opt in, I was out here calling bullshit and reiterating all the same points.

This was expected. A couple weeks ago once it became clear outing out was a real possibility, I was out on Reddit getting downvoted for trying to set expectations of a TPE.

"Set your expectations on return as extremely low. Like "trade exception and protected 2nd rounder" low"

So now we are here. For those of you who aren't feeling great about it, I'm here to tell you that nothing about this is bad. The 28.5 mil TPE gives us huge flexibility. I'm excited about it. You should be too.

A Celtic TPE example you may have forgotten: To give you an idea of the type of flexibility this provides. Because we gave up more salary than we received during the KG/Pierce to Brooklyn trade, we ended up getting a 10.4 mil trade exception. Boston eventually used that TPE to take on the unwanted contracts of Tyler Zeller and Marcus Thornton from the Cavs when Cleveland was looking to free up cap space to bring back LeBron from Miami. For our troubles, Cleveland gave us a 1st round pick. Boston ended up flipping that 1st for Isaiah Thomas. That's the kind of big picture shit you can do with just a 10.4 mil exception. What we're dealing with is a historically high 28.5 mil trade exception. This is like viagra for basketball nerds.

Option 1: Trade a player (or players) immediately why staying under the hard cap: /u/Warlandoboom just made a pretty thorough post listing some of the names we could potentially target. You can think small-time here... veteran role players like George Hill (9.6 mil) or Patty Mills (13.2 mil) who could help our bench. For example, maybe you throw a 2nd rounder at the Thunder and use part of the TPE to take Hill's salary. Then maybe you use a little more of the TPE to target a player like Doug McDermott and send a 2nd to Indiana to absorb his 7.3 mil salary. One big thing to keep in mind here is Boston has a hard cap right now. As a result of signing Tristan Thompson, to a specific type of MLE contract, we have a hard cap of 138.9 mil we need to stay under. Essentially what that means is that although we have a 28.5 mil TPE, we can only really bring in an additional 20ish mil in salary while staying under that "hard cap". This limits you a bit, but still puts you in the wheelhouse of taking on players like Evan Fournier (17 mil), Aaron Gordon (18.1 mil), Myles Turner (18 mil) and several other players you could conceivably acquire for future draft considerations - utilizing part of the TPE to acquire them.

Option 2: Give up talent and utilize the full TPE immediately: So while that "hard cap" sounds limiting, here's the thing you should also consider... If Boston were to include other players in the deal, they'd be removing salary from the books and extending how much money you can bring on while staying under the hard cap. Players like Theis (5 mil), Semi (1.7 mil), Edwards (1.5 mil), Time Lord (2 mil), Langford (3.6 mil) are all tradeable players with some trade value. I'll give you a hypothetical example. The math on this isn't perfect, but it should illustrate what I'm talking about. DeMar Derozan is in the final year of his deal making 27.7 mil. Spurs are certainly open to moving him. Say you were to give up Theis (5 mil), Semi (1.7 mil), Edwards (1.5 mil) and a 1st rounder to the Spurs for Derozan. By shedding that additional 8.2 mil in salary (Theis/Semi/Edwards), that "21 mil in space under the hard cap" is no longer "21 mil"... From the Spurs perspective, they are trading out 27.7 mil and taking back 8.2 mil. That would actually generate a 19.5 TPE that the Spurs would be able to use over the next year. From Boston's perspective, they are trading away contracts to increase the space under that hard cap, but they still end up just using the 28.5 mil TPE to absorb DeRozan's 27.7 mil contract.

Again, I offer this merely as a hypothetical... but the bottom line is that Boston can functionally target any player making under 28.5 mil and can give up some of their young talent along with picks to make it happen. That's huge. And honestly, I had to run this by dangercart to get confirmation it was possible, because I was a little confused on it myself. Prior to getting clarity, I was under the impression you would need to salary dump talent on a 3rd team (like the Knicks or Thunder) before being able to utilize the full 28.5 mil TPE. But it appears you can just ship out the talent to the team you're dealing with. This opens up a TON of possibilities. Rudy Gobert (26.5 mil) is in the final year of his deal... if Utah fears he's bailing, he's suddenly an option. Someone like Draymond Green (22.5 mil) is an option if the Warriors do a soft rebuild. You know... not that this is nearly enough (and this is outright absurd), but even something insane like Smart + Nesmith + Romeo + every tradeable pick for Giannis (27.5 mil in the final year of his deal) is theoretically possible if he suddenly pulls a reverse-Anthony Davis and tells the Bucks, "get me to Boston". Set your sights WAY lower than that, but that's at least functionally possible. Look for anyone making under 28.5 mil in 2020-21 and starting getting creative: https://www.basketball-reference.com/contracts/players.html

Option 3: Get picks along with bad contract: This is pretty much exactly what Boston did with that 10.4 mil Pierce exception and what Sam Presti LOVES to do with the Thunder. We have a full year to use this TPE. That means we'll have it during the entirety of next offseason. That's incredible. It means that when teams start desperately looking to shed some salary to make a run at the 2021 Free agent class or even just shed some dead weight to avoid the luxury tax, they can look towards the Celtics as a team that can help them. You know... maybe a team like the Rockets say, "hey please take Eric Gordon's 18.5 mil from us and we'll give you a 1st... we REALLY need to try to pair Harden with Giannis" ... maybe Atlanta asks you take Capela's 17 mil off their hands. Maybe the Clippers are giving away a 1st for anyone who takes Patrick Beverly's contract. You never know. Opportunities should present themselves. Even players you don't currently see as options might suddenly become options as the result of injuries or shifting team priorities. When Philly signed Horford, they weren't expecting that they'd be giving up a 1st rounder to salary dump him a year later.

Option 4: Target 2021 Free Agents: I'll make this simple by referencing a couple guys I already used in hypotheticals. Boston could just hang onto the 28.5 mil TPE until next offseason and use it as basically a 28.5 mil free agent slot while retaining Tatum/Brown/Kemba/Smart/Thompson/etc. They then can have conversations with guys like Gobert and Derozan about coming to boston. We can offer a starting salary at 28.5 mil. Basically, we can offer them a deal very similar to what Hayward just got (4 years 120 mil). They'd need to come to Boston via a sign-and-trade with the original team signing the guy and immediately trading him to Boston. Example: Utah signing and trading Gobert to Boston, Boston using the TPE to absorb the contract, and Utah getting a 28.5 mil TPE of their own they'd have a year to use in a similar manner. You can set your sights on reasonable free agents... vets like LaMarcus Aldridge or someone like Blake Griffin (can opt out after this season), but if you REALLY want to enter fantasy land, you can dream of a scenario where Giannis decides he wants to team up with Tatum, Jaylen and Kemba and agrees to an absurd under-valued contract of 28.5 mil - coming via sign-and-trade with us sending some compensation to the Bucks. It's extremely unlikely, but technically not without prescedent. Kevin Durant famously took a stupid paycut to play with the Warriors (got paid 25 mil for the 2017-18 season). Chalk this up with "no fucking way", but again... should get you thinking about possibilities. There's quite a few big names who COULD become free agents in 2021 - such as Kawhi and Paul George if the Clippers fall on their face. And players less exciting like Oladipo and Andre Drummond who might be targets: https://www.nbcsports.com/boston/celtics/top-15-free-agents-2021-nba-offseason

Bottom line: Have patience with this. Don't freak out if you don't see Ainge make a move immediately. But big-picture, that TPE should have a much greater impact than Hayward had for the Celtics. Don't get me wrong... I've been at the front of the Hayward hype train this season pointing out he was arguably our 2nd best player when healthy. I stand by it, but ultimately it never mattered. He was literally only healthy for 1 playoff game. 2018 - DNP. 2019 - Shadow of himself coming off the bench. 2020 - Got 12 points in the first game of the playoffs and immediately hurt himself. Came back weeks later at 40% playing on one leg. We paid that dude nearly 100 mil and he literally played 1 healthy playoff game for us. We've lost NOTHING and only gained options. Exciting times.

LarBrd33 is a life-long Celtic fanatic who has contributed to CLNS, CelticsBlog, and CelticsLife.  He currently co-hosts the “Celtics Reddit Podcast”.  You can find more of his dumb takes via twitter @LarBrd33, via Reddit as u/LarBrd33, or via the weird Celtic videos he posts on his YouTube channel.