What the Hell Happened to...Sly Williams? 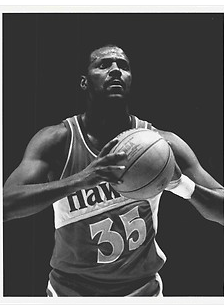 As the Celtics & Hawks continue their playoff tussle this week, I found it only appropriate this week in WTHHT to remember a former Celtic & Hawk.  Imagine having had an opportunity to be on the (arguably) greatest NBA team of all time, the 1986 Celtics.  Imagine being on them to start the year but blowing your chance.  Imagine never recovering from that and never making it back to the NBA, period.  This week in What the Hell Happened To, those imaginations are remembered as a reality for Sly Williams.

It was a rags-to-riches story for Sly Williams had been raised fatherless in the projects of New Haven, one of 16 children. Just like WTHHT predecessor Marvin Barnes, Sly was the focus of a major recruiting war between Providence College and the University of Rhode Island, even committing to both places originally.  Unlike Marvin, he chose URI.  When he left for the NBA after his junior year, he had set the school's season scoring record. 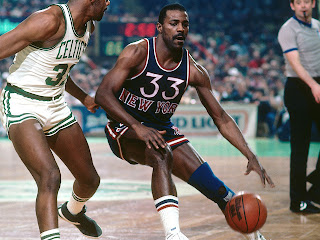 In the 1979 draft he was the third of three first round picks by the Knicks, 21st overall.  He entered the NBA with a strong low-post game and a flair for the dramatic (just another trait shared with Barnes).  But he had also begun to develop a tardiness and unreliability that would remain for him throughout the NBA and into the future.  In college, he would miss classes and training meals and was suspended by coach Jack Kraft. In the NBA, he would miss planes and practices, prompting suspensions, a trade, and two releases.


''My career was controversial, ever since I went to Rhode Island instead of Providence,'' he said in an interview at the Broome County Jail. ''It has been a mess. But I always had fun with that. I always liked the publicity, the adversity. I thrived on big games. If it wasn't a big game, I was lost.''

Sly had very few ''big game'' opportunities in New York with the hapless Knicks.  After 4 seasons he was shipped to the Hawks for Rudy Macklin.  In Atlanta he rarely played during two seasons because of a broken thumb, a broken foot, and a lower intestinal ailment.  But one place where many "big game" opportunities lay was in Boston.  Red Auerbach, notorious for trying to get the most out of guys who were blacklisted in the NBA, was a fan of Sly's.  When the Knicks had tried to sign Kevin McHale away from the Celtics, Red had signed Williams and two other Knick players, forcing the Knicks to sign their own guys and give up pursuit of McHale.

After being released by Atlanta, Williams found himself in Auerbach's office along with the Celtics coaching staff. Auerbach showed Williams some watches he kept in his desk.

Unfortunately for Sly, he turned out to be the ones that could be tossed.  When he signed with the Celtics Sly thought that he was going to be an immediate rotation player.  Meanwhile the Celtics thought they had made it clear that the signing was more for the future.


''It was never put to me that it was going to be down the road,'' Williams said. ''I was going to be a free agent at the end of the season. If I'm sitting on the bench, where am I going to go? How much money am I going to make? Your options are limited. If they had told me I wasn't going to play, I would not have gone there.''

He did play during the exhibition season, when Larry Bird was nursing a sore back. But his intestinal ailment returned, sidelining him over the final part of the exhibition season. He was on the Opening Night
roster, but when the team returned from its opening weekend trip to New Jersey and Cleveland, Williams was missing at Monday's practice. He had appeared in 6 games total and then left the team for what the
Celtics called ''personal reasons.'' He returned to his Connecticut home to deal with issues both medical and personal.  He would never return to the Celtics or the NBA.

At the time, Williams's marriage was falling apart. He and his wife, Donna, were parents of a daughter, Nikeya. They would soon have a son, Sly Jr. But their relationship disintegrated as Williams felt pressured being the breadwinner in a large, extended family with everyone wanting something. He found it hard to say no.


''I tried to help everyone,'' he said. ''When they had a problem, they would bring it to me because they think that the best way it can be solved is with money. It was always, `I need this. I need that.' But what happens when I want something or when I need to talk to someone?  Who do I see? I didn't know.''

Williams also was still trying to cope with a murder/suicide involving his brother and nephew. Before Williams signed with Boston, his brother Chris had taken out a shotgun and killed his infant son before turning the gun on himself. Williams was close to Chris in both age and experience.


''I just didn't want to play basketball anymore. I was depressed. I started doing drugs. I thought about suicide. I'm sitting there, not knowing what to do or where to turn. I had had enough. I didn't want to play. I had shut down. As I look back on it now, I was crying out for help but I didn't know how to ask for it.''

On December 2, 1985, Williams was released. His Boston career consisted of 54 minutes spread out over six games. He scored 17 points, and had 15 rebounds and 15 fouls.  And other than a two-month stint in Spain in early 1986, Williams never played professional basketball again.

The Celtics would go on to win the NBA championship in the 1985-86 season, and had Williams stuck around, may have had an opportunity to be the missing piece on the 1987 team, whose bench was just too damn weak to win it all.  Instead, Williams spent the next 15 years living in four states, working menial jobs, rarely picking up a basketball, and having occasional run-ins with the law. He received a five-year suspended sentence in 1991 on assault, criminal trespass, and unlawful restraint charges against a woman in Connecticut.

Eventually, he collected severance pay from the NBA and moved to Charlotte, where two of his brothers had settled.  He stayed there five years where he worked for a furniture company and as an auto mechanic. He said he never had trouble finding work, or moving up the ladder once he got a job.  On job applications, he never mentioned that ''prior work experience'' included playing in the NBA, because, as he put it, ''I wanted to go where nobody knew me and not be hassled. I was very, very happy there. I probably should never have left.''

But he did leave. A relationship there produced a son, and Williams moved with his children to a farm in northern Pennsylvania to be with the mother of his new son. The two eventually agreed to separate, the woman remaining with her family in Pennsylvania and Williams moving to nearby Elmira, N.Y., where he could still occasionally see his son.  In 1998, Sly moved to Binghamton, NY near the Pennsylvania border, and he found work on the graveyard shift as a supervisor at American Pipe and Plastics Co. in neighboring Kirkwood. He said he earned around $25,000 a year.

It was in Binghamton that Williams would ultimately commit the crime that landed him prison time.  Williams was charged with sodomy, burglary, criminal contempt, kidnapping, and two counts of rape, all felonies, stemming from incidents in September 2001 and January 2002. On the eve of jury selection, Williams pleaded guilty to the single kidnapping charge. The other charges were dropped.

Williams blames no one but himself, but still insists the punishment does not fit the crime:

His former Celtic teammates wondered whatever happened to Williams, Danny Ainge and Kevin McHale being two of them.  Inside the Celtics locker room at their old practice site at Hellenic College, the two placed a piece of tape at the end of a bench that season where Williams used to sit. On the tape, they wrote,''Sly's Spot.'' The message was clear: If you sit here, like Sly Williams did, then you, too, will vanish.  No one sat there for the rest of the season.

As the Hawks and Celtics meet in this week's playoffs, it's as good as time as any for this week to remember Sly, who was still in prison as of 2006.  No word on whether he was released since then.  His son Sly Williams Jr, made the All State HS Basketball Team for Connecticut in 2006 while playing for West Haven.  Current Celtics coach Doc Rivers, a teammate of Williams in Atlanta, said Sly was the craziest player he ever met.