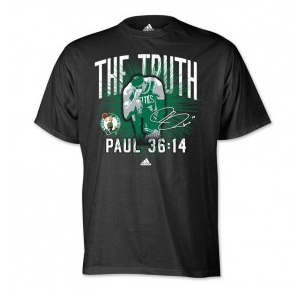 Listen, count me as impressed as the next Celtics fan with Paul Pierce's performance Tuesday night. It was a game the Celtics had to have, they were injured and short handed. As Doc pointed out, they could win the game in only one way, and that was on the back of Paul Pierce.

The Truth delivered, he almost single handedly tied the series going back to Boston. I was happy, it was great. More than great, it was awesome. I love Paul Pierce and I wasn't surprised that he could do what he did. He showed that he's a winner, a leader and still one of the top players in this league.

What I was surprised about was the reaction afterward.

All of a sudden that Game 2 is being treated like it should be lifted into the rafters with the 17 banners. Bob Ryan wrote his article in the Globe about it, in which he said this:

When you play for the Boston Celtics, anything positive you do always bumps into history. Whatever you’ve just done, somebody is around to tell you that somebody else did it better in the ’50s, ’60s, ’70s, ’80s, ’90s, or even four years ago.

Nor has this bunch won anything yet. What they do have is the knowledge that when the great, gutty, inspiring road playoff victories in Celtics history are annotated, what they did Tuesday night at Philips Arena will merit one of the top spots.

Still, while it was a stretch by Ryan, it's not that big of a deal.

But now, the Boston Celtics are selling the shirt pictured above on their website. I mean, come on man...

I've said it several times in this post, I loved it, it was an awesome game but.... it was Game 2 not 7, it was Round one not four and it was against... not the star studded Miami Heat, not the historic rival Los Angeles Lakers, not the up and coming Oklahoma City Thunder, not the defending champion Dallas Mavericks, not even against the number 1 in the NBA San Antonio Spurs.

It was the Atlanta Hawks, who are 17-24 in the playoffs the last four years and have been swept twice.

The Celtics should've beat the Hawks, Rondo or no Rondo. Boston is a better team than Atlanta.

I have all the respect in the world for Pierce and his game deserves recognition, but people are taking things too far. We're two games in the post-season. As Pierce has said time and time again, the only thing this team cares about is raising that banner.

So, media, stop treating it like the Celtics already did.