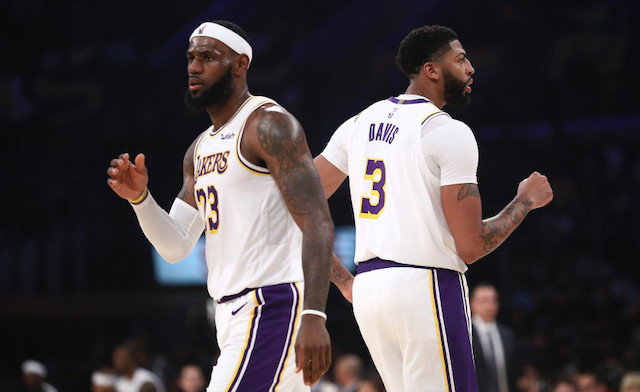 So much for all the NBA teams being at the same competitive disadvantage of not being able to work out together. According to Bill Simmons, LeBron James and his Lakers teammates are rumored to have been working out together and likely scrimmaging despite current NBA rules against this.

Bill Simmons rumor: All the Lakers are playing at this rich guy’s house and it’s all like ‘no-body talk about this.” pic.twitter.com/iqEQSshijS
— CelticsLife.com (@celticslife) June 22, 2020

Pelicans guard JJ Redick who played in Los Angeles himself previously as a Clipper corroborated the rumor on Simmons' podcast. Redick says he's even worked out himself prior to all this at the Bel Air mansion in question.

On April 16, barely a month after Rudy Gobert tested positive for COVID-19 and the league was suspended and players were put under strict isolation guidelines, Danny Green told Spectrum SportsNet that LeBron and Anthony Davis were making their facilities available to their teammates for informal, presumably workouts.

On May 21, Shams Charania reported for Stadium that LeBron was already holding "private workouts with 1-2 teammates at a time at a closed-off, private location."

And now this report from Simmons podcast.

Besides the whole competitive balance thing there's the optics of while the rest of us were staying home either alone or with family/housemates, Lakers players weren't following those guidelines. And while the rest of us are social distancing, these Lakers players are reportedly scrimmaging. It's not like they are in a bubble either; the players interact with others outside of the mansion.

The NBA was concerned about the preferential treatment they received getting Covid tests back in March and this seems somewhat similar. NBA players who already have huge houses to stay home in and stop the spread, decided to hang out together because winning a championship was more important than doing their part? While other teams' players can only recently work out alone at team facilities, the Lakers were free to do whatever they wanted prior to even that loosening?

Obviously this is coming from a biased vantage point as I can't stand the Lakers and don't want them to win their 17th title this season, but still I find this disappointing. The NBA won't punish LeBron and the Lakers if you're wondering. Who knew that Lakers basketball was an "essential job"?