It is only July 3, 2019, and already at least two members of the 2016 NBA draft class have been offered 5-year extensions. Jamal Murray of the Denver nuggets was the first, and now comes the 76'ers Ben Simmons, taken first-overall in the 2016 draft. Our own Jaylen Brown was plucked 3rd that year by Danny Ainge, but don't expect an extension for Jaylen. 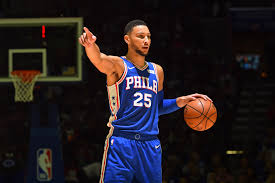 Ben Simmons tried to shoot down this deal so he could become a free agent but he missed.

You just knew these comments were going to fly after the extension announcement, particularly from Celtics fans. Philly has been Boston's rival for a long time, and the fact Ben can't shoot from any distance automatically makes him a target. Expect all of this to intensify with former Celtic, Al Horford, joining the Philly Phlock (Flock?). Here comes another comment.

As I wrote in the Jamal Murray piece, Ainge is not prone to extending 4th-year players from their rookie contracts. He did not do so with Avery Bradley, Marcus Smart or Terry Rozier. So unless Brown has an outstanding 2019-20 season, there will be no extension. The first Philly-Boston matchup this coming season will be a game to watch. I personally wish Horford had chosen another team.