If Boston lands Kemba, could Nerlens Noel be an option?


If the Boston Celtics actually manage to land Kemba Walker, building a team around him won't be without challenges.

Chief among them is restocking the team's frontcourt, and with the likely max contract offer of $141 million over four years being what it'd take to land the former UConn standout, would require moving on from virtually all of Boston's free agents.

This would pile on the losses to the frontcourt -- having already watched Al Horford and Aron Baynes depart the team earlier this month -- and with Marcus Morris Sr. out of the picture, the team will need to find bigs in a hurry. 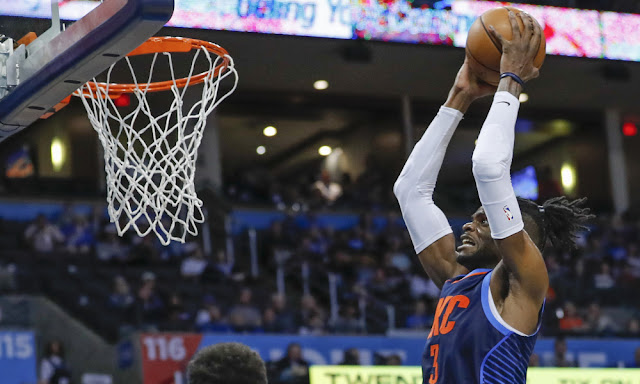 Luckily for the team, while there may be more cap than in nearly a half-decade for teams to spend it on, there's also nearly half the league on the market looking for new deals, which could translate to very solid big men -- experiencing their own slump in value separate from cap issues -- being available on the cheap.

One in particular who has been tied to the team in the past and happens to be a native of the area is Nerlens Noel, who did not pick up his $1.9 million 2019-20 option with the Oklahoma City Thunder yesterday.

Boston, who will have the full room exception ($4.7 million) to sign a big with, could more than double his salary -- a far cry from a much larger deal he turned down not too long ago, but perhaps as good as he might get anywhere else.

By comparison that's slightly better rebounding than Horford/Baynes with much higher BLK%. As a low risk option you can't hate it
— Dan Greenberg (@StoolGreenie) June 27, 2019

Noel, a capable defender able to work the pick-and-roll who fits the team's youth movement at just 25 years old, would have ample opportunity to reset his value, with nearly all the playing time he could ask for in a frontcourt that would likely be comprised of Gordon Hayward starting at the four, backed up by recent draftee Grant Williams, with Noel followed up by another Williams, Robert -- a.k.a. "Timelord".

The dregs of the frontcourt would likely see Semi Ojeleye and perhaps Daniel Theis plus another player with some bulk picked up off of the free agency wreckage able to be a stout interior presence against more traditional lineups; while fading in the modern NBA, each team tends to keep such a big on board just in case for this reason.

While Nerlens would be in no way a replacement for Horford, very few ever could be -- and for where Boston looks to be for at least the next season, Noel might be just what the team needs, and vice-versa.