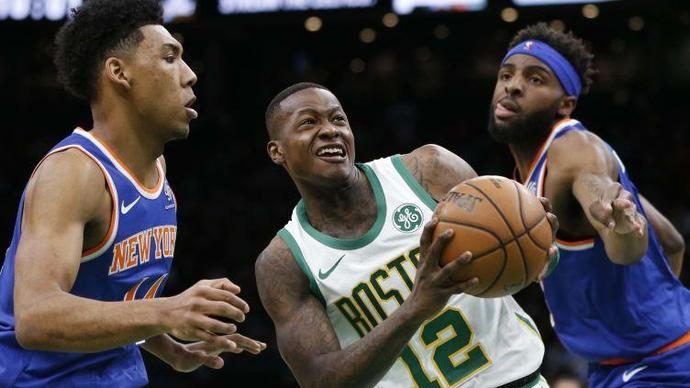 Terry Rozier may have talked himself out of Boston with his complaints once this past season ended and with the Celtics the frontrunner to sign star guard Kemba Walker, Scary Terry will definitely be calling a new city home next season. Sounds like it could be the Knicks.

If he becomes an unrestricted free agent, Knicks’ point guard target Terry Rozier is open to taking a short-term one or two-year deal, according to NBA sources.

The Knicks’ interest level in Rozier, 25, has elevated since reports have the Celtics as favorites to land Charlotte’s Kemba Walker.

If the Knicks get spurned by Kyrie Irving, who reportedly has the Nets higher on his wish list, the Knicks would consider Rozier a prime target.

“After Kyrie and Kemba, I think Rozier is next up,’’ said a person familiar with the Knicks’ thinking. “I think he’d be good with Kevin Knox and RJ (Barrett).”


The Knicks would be a good landing spot for Rozier. He'd get good money on a short contract and plenty of opportunities to put up big numbers. Then in a year or two, he'd have the chance to get a lucrative long term contract.

The Knicks plan if they strike out on the top free agents is not to do what they typically do which is throw a lot of money at second tier guys, but instead it would be too sign short term contracts, essentially punting their cap space back a year.