For Celtics fan enjoyment and excitement, give me over-achievement every time


Let me start by saying that watching the 60's Celtics teams overpower most opponents was great to watch, but there was often a level of boredom to it. Those Boston teams were so skilled and deep, they dominated most opponents. The 2018-19 version of the Celts? Disappointing is putting it mildly. It was a classic demonstration of under-achievement. We hope to not see that again. 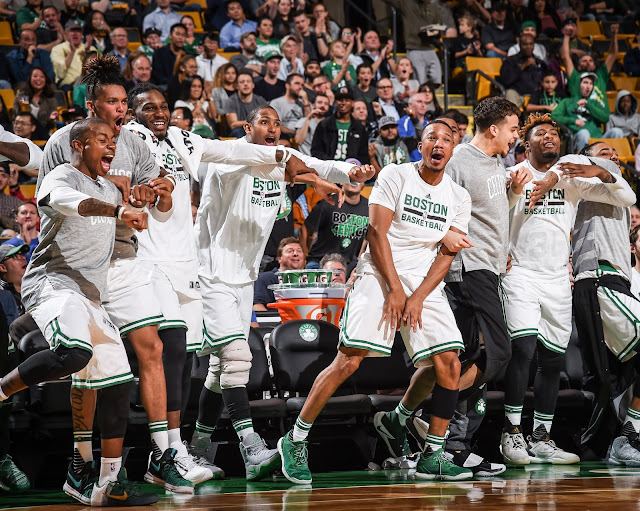 Go back to the 2016-17 guys in green. They went all the way to the Eastern Conference Finals against the Cavaliers led by Isaiah Thomas' heroic efforts. That crew also included Al Horford, Avery Bradley, Jaylen Brown, Marcus Smart and Terry Rozier, and the TEAM was much better than the assemblage of individual parts - the real definition of over-achievement.

down to business...back to ball movement and defense...free from gliterati primadonna better than everyone else no fault of my own earth is flat I should taken 30 shots bull shit that is the culture eroding presence of @KyrieIrving

We saw it again in the 2017-18 post-season. The Celtics still had Al, Terry, Jaylen and Smart, but had added Marcus Morris, Jayson Tatum, Shane Larkin, Aron Baynes and Daniel Theis. That group took the Cleveland Cavaliers to a close Game 7 in the Finals before finally dropping the final game. The team was without both Gordon Hayward and Kyrie Irving due to injuries, but they still played as a TEAM and came very close to facing the Warriors in the Finals.

Getting Everyone involved, but most of all, enjoying to watch them play, not frustrated!
Healthy Gordon Hayward is a key.

Baynes is back in the fold. I feel Horford will be back. Looks like Kyrie is gone. Marcus Morris' status is up in the air. Same with Theis. Ditto for T-Ro. Smart and the Jay Team escaped departure with the Lakers grabbing Anthony Davis. So what can we expect from the 2019-20 Celtics?

One thing is for sure. Boston fans want no part of what we experienced last season - and Danny Ainge and Brad Stevens know it. I know there seems to be an aversion to little guys with Danny and Brad, but most of us loved to see the excitement and production of Bradley, Rozier, Isaiah and Larkin in the 2017 and 2018 post-seasons.

If both Terry and Kyrie leave, we need another reliable point guard. We also need another solid big, and Stevens really needs to see what we have with Rob Williams. Is he a bust or possible star. With three draft picks in the first round, expect Danny will exit the draft with some added value for his team, whether he uses all three - consolidates them - or works a trade.

“I think if you asked anybody on the team we wish we could do it over." pic.twitter.com/JjzQahBeYi

One thing not to expect? A repeat of last season. In a way, this will be a do-over of the lost, past season - a chance at redemption for the players that remain. Fans want to see their team play as ONE - to be exciting - to be entertaining - and to over-achieve. A Championship would be great, but I truly believe most Celtics fans would be content to see the guys in green fulfill the four goals I outlined in the preceding sentence.