Kyrie Irving to meet with Celtics prior to free agency 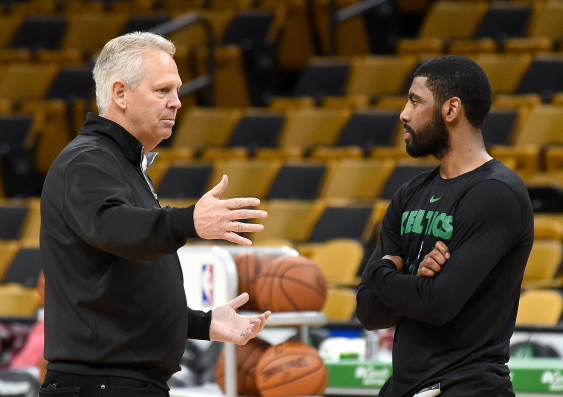 Apparently the Celtics will get another chance to speak with Kyrie Irving before the end of the month according to Shams Charania.

Before Kyrie Irving officially hits the open market, the point guard will reportedly meet with the Boston Celtics to discuss his future, according to Shams Charania of The Athletic and Stadium.

The two sides could potentially meet before Thursday's NBA draft as they "look for clarity ahead of the start of free agency on June 30."

It's doubtful that this meeting will change Irving's mind about leaving, but it at least gives the Celtics an opportunity to better prepare for free agency. The Celtics were never competitive with an offer for Anthony Davis mostly because they feel like Irving is leaving. Their idea was to form a super team of Davis, Irving, Horford, Hayward and one of the Jay's, but with Irving out of the mix, it became too risky to trade for Davis.

Now why wouldn't Davis and Irving want to compete for championships the next five to ten years in Boston together surrounded by a solid supporting cast? You'll have to ask them. Davis wanted L.A. or New York. Who knows what Irving wants?

The Irving/Celtics meeting could also be used to discuss sign-and-trades, but the problem with that is all of the teams Kyrie is interested have cap space already. I guess the Lakers cap situation is questionable, but they don't have any players left to trade. Kyle Kuzma barely makes any money. I'm expecting the Celtics to draft a point guard with one of their picks in Thursday's draft. Maybe Ainge will find another Rondo.