With the Anthony Davis trade firmly in the Boston Celtics' rear-view mirror, the front office now turns its attention to building next season's team.

There's a number of important moves to be made or decided in the coming weeks, and their timing and the moves of other teams may play a large role in the decisions Boston President of Basketball Operations Danny Ainge makes. Let's take a look at what they might be, and how they could pan out. I will preface this that the hierarchy listed below is my own view, and may be very far from what end up seeing by training camp.

That said, the single most important issue going forward is retaining Al Horford's services. Enough ink has not been spilt on the looming opt-in date for Al's final contract year, and it's something that in no way should be taken for granted. 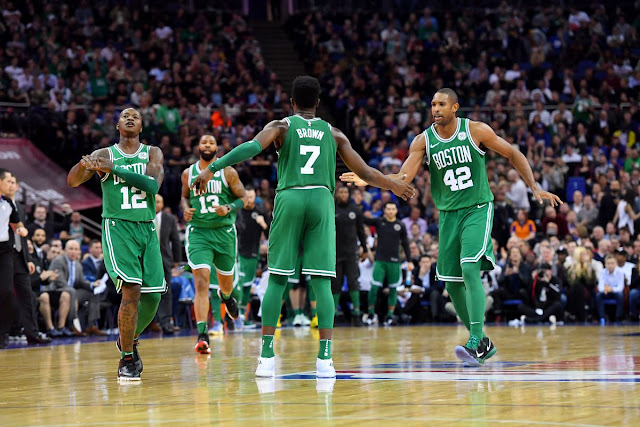 Whether or not Kyrie Irving decides to stay after his reportedly planned pre-draft meeting with the team's front office produces a new deal (my bet this is just a courtesy to let them make the moves that will best help the team), Horford's departure would be a massive loss, and sans Irving, a crippling one at least short term.

The writing, however, regarding Kyrie seems to be on the wall -- pre-draft meeting or no -- so it only becomes more imperative to connect the dots that would convince Al to re-sign. While we know Horford loves the city, we also know he wants at least a puncher's chance at a ring, too.

So, it's wise to keep an eye on the teams who could sign him outright -- the Los Angeles Clippers, Brooklyn Nets, and Philadelphia 76ers and perhaps the Los Angeles Lakers could get themselves to enough space to sign Al outright and be in as good or better position to contend pending other moves -- while also thinking about potential sign-and-trade should the former University of Florida big man decide he wants to decamp to a contender without cap space.

This very scenario may be the source of rumored talks between the Houston Rockets and Boston, who could conceivably flip Al for Rockets big man Clint Capela after considering base year compensation rules -- not an ideal situation, but certainly better than watching him walk for naught.

After Al, comes the need to make a decision about Marcus Morris Sr., who reportedly is open to a return to the team, but plans to explore the market, as a guy with his lower career earnings should. He's done enough team-friendly deals in the past, and this is likely his last real shot at a double-digit payday. I don't see Boston biting at more than $15 million per year on a short deal, or an average of $10-13 for a multi-year contract, but I also don't see much more than that being on the table for him elsewhere.

Now the AD is off the table, are there players that the #Celtics could target in free agency?

Bringing back Mook may be a not-small part of convincing Horford a partial rebuild is not in the cards, but so could the next order of business: sorting out the point guard rotation. Barring a mind-melting about-face by Uncle Drew, one would think the keys belong to Marcus Smart. I can see the wisdom of keeping Terry Rozier with the team -- his attitude might change knowing he'll be able to bank on 30 to 35 minutes per game with the opportunity to earn a starting role -- but if I'm Danny, I'll be looking to move Rozier to a team where the fit makes more sense at the earliest possible moment should this go down.

After seeing the damage putting assets over cohesion did to last year's Celts, I'm inclined to aim for either a sign-and-trade for Scary Terry if one can be found, or trying to use either the taxpayer MLE or -- if he is as amenable as suggested by some reports -- the space that could be created by a Horford extension for years over dollars, with a backup floor general who better fits the team's needs.

Personally, despite fantasies of flipping Gordon Hayward for Mike Conley or Chris Paul, I don't think it's very wise to tie up roughly a third of the team's cap in one of two of the league's most injury-prone guards even considering their talent in the past; either could easily fall off a cliff well before the end of their current deals, and even if Hayward never gets better than he was towards the end of the season, his upside is enough I think the other routes to securing another solid one to be wiser.

Among popular options are Patrick Beverley, Ricky Rubio, Austin Rivers, Jeff Teague and Darren Collison in the range of space a Horford restructuring might create (my guess would be around $10 million in cap), and for the taxpayer MLE -- projected to be in the neighborhood of around $6 million -- I'd kick the tires on Elfrid Payton, Ish Smith, Rajon Rondo, TJ McConnell, Jeremy Lin, Corey Joseph, or Emmanuel Mudiay.

The more-or-less best-case scenario would have the team with Al Horford, Gordon Hayward, Jaylen Brown, Jayson Tatum, Marcus Smart, Marcus Morris, Aron Baynes, Robert Williams, Semi Ojeleye, and either Terry Rozier or one of the aforementioned backup point guards on the roster for a total of ten of 15 total roster slots. Personally, I'd also like to use whatever tools are left to add a rangy big or shooter able to also crash the cup.

Ideally, a bargain might pop up based on just the sheer number of guys who may hit the market, with someone like Julius Randle, Bojan Bogdanovic, Brook Lopez, JaMychal Green or Nikola Mirotic finding themselves standing when the cap space version of musical chairs music stops, but this is fairly unlikely even given that as much as half the league could be on the move this summer. More likely such options could include Tomas Satoransky, Thomas Bryant, Robin Lopez, JaVale McGee, Wayne Ellington, or James Ennis.

With three picks incoming, that could bring the roster to 14, with the last spot (in my world) reserved for Isaiah Thomas (should he want it) on a make-good veteran's minimum deal, perhaps, or more likely, Boston could keep the slots open for any bargains who may pop up once all the cap's been spent. Of course, the team could elect to send some of those picks into future drafts, and there's a second rounder at 51 overall available as well, but even if they use a two-way contract for any one of the four picks, I very much doubt more than three being used by the team this summer.

The scenarios sketched out above represent a very high-end outcome of the variety of potential ones facing the Celtics, so it would be wise to set your hopes lower -- maybe MUCH lower after how things have gone recently -- but it should give you a basic idea of what's possible, if not so likely. What players would you most like to see on the team next season? Which are the team's biggest needs, and how would you address them? Let us know in the comments below.