I remember it well - Celtics coach Bill Fitch yelling at Danny Ainge to stay with Tiny Archibald during a scrimmage. Ainge admitted that he couldn't guard the quick mite, and Danny was considered by many (at the time) the fastest white guy in the league. Nate would drive to the hoop against any opponent, regardless of size. Who knew in later years he would undergo a heart transplant. 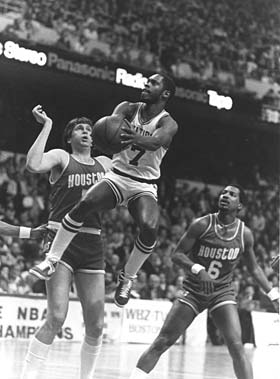 In his 60's, Nate was diagnosed with amyloidosis and later underwent a heart transplant. In her excellent article for ESPN, Jackie MacMullan wrote the following:

His cardiologist suggested a heart transplant and recommended that Archibald check himself into Columbia Presbyterian Hospital to prepare for the procedure. "The doc told me, 'Your heart can't take much more,''' Tiny recalls.

Tiny wanted to know how long he'd have to stay in the hospital. The answer was sobering; it could be three months, three years, seven years, all depending on his position on the waiting list and the number of donors. Archibald's health was deteriorating and he would need to remain hospitalized until a donor came through. Tiny informed his medical team that he refused to stay cooped up in a hospital not knowing how long he would be there. "But then the docs warned me, 'If you leave here, I don't know how long you will last,''' Tiny says.

Tiny went through some tough times post-transplant, but nothing seems to deter him for very long. He has now joined Ice Cube's BIG3 League as coach of the Aliens and be assured that the little guy with the heart of a lion will be instilling energy into his troops.

For those that have never seen Tiny perform on the hardwood (and those that have), I strongly recommend taking a few minutes to view the video below. Archibald's BIG3 team, Aliens, will be in action on June 23, 2019 at Bankers Life Fieldhouse, Indianapolis, Indiana. The BIG3 will be coming to New England on July 13, 2019 when the teams compete at Dunkin Donuts Center, Providence, RI.

How determined and feisty was Nate in rehab following transplant? Did you even have to ask? (Per ESPN's Jackie MacMullan):

He (Tiny) was finally released from Columbia Presbyterian on July 18. A home health aide visited and supervised his daily walks, which were to be limited to two blocks. Tiny took him eight blocks the first time, then 10 blocks the next. The aide protested, explaining it was imperative to keep Archibald's heart on a steady beat. "I've been doing this my whole life," Tiny shot back. "I'm going to walk the way I want to walk.''

"He finally just stopped coming." The aide obviously knew who he was up against.

Photo via NBA
Video via The NBAAfrica