Aron Baynes in - Kyrie Irving out (for now) - Al Horford next


Aron Baynes is back in the Celtics fold, having opted in to his $5.5 million player option for 2029-20. Kyrie Irving has opted out of his deal and will become a free agent on June 30. Al Horford's decision date is June 18 for his player option on $30.1 million for the upcoming season. 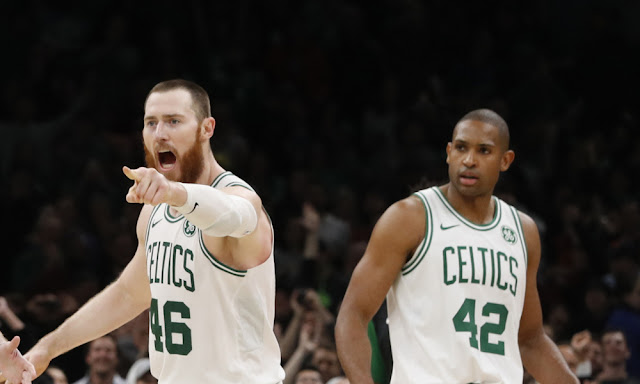 We all knew Kyrie would opt out and negotiate with the Celtics and/or other NBA teams. I predicted Aron's course in a previous article. He likes Boston and feels comfortable with the team and his role.

I can envision Al opting out and hopefully negotiating a multi-year deal that nets him more money, but over a longer period of time. Besides being the core of Boston's sparse big man lineup, they offered stability last season when most of the guys in green played like a pick-up, YMCA crew.

Baynes and Horford play a different style. Baynes-ey covers the perimeter when he has to, but his protection of the paint is classic. He can hit from distance, but rarely does so. His game is primarily one of blood, thunder and brawn. I'm sure opponents driving into the paint visualize Aron as "all of Australia." Not so Al. Horford's game is one of finesse. He can score inside, but he is a solid scorer beyond the arc. Despite the difference in style, these two seem to get along just fine. They tend to complement each other.

I, for one, am glad to see the Awesome Aussie back with us. Be great to see Do-it-all Al back also. Brad Stevens is already finding fixes for the inconsistency that plagued his team last season. These two bigs make for a great start to that cure.