Bulpett: Kyrie Irving has not removed the Celtics from consideration


While everyone is rightfully checking social media several times an hour over the last day to find out what the latest news regarding the Anthony Davis trade talks is, another crucial drama for the Boston Celtics is slowly unfolding.

Kyrie Irving, whose free agency was officially confirmed yesterday when he elected to not opt-in to the final year of his contract, has had issues of his own to contend with, should reporting of his interest in linking up with Golden State Warriors star Kevin Durant be accurate.

Rumors have suggested the pair have had interest in joining the New York Knicks or perhaps the Brooklyn Nets, the latter of which has been linked to Irving tenuously in his social life and choice of representation in recent days. 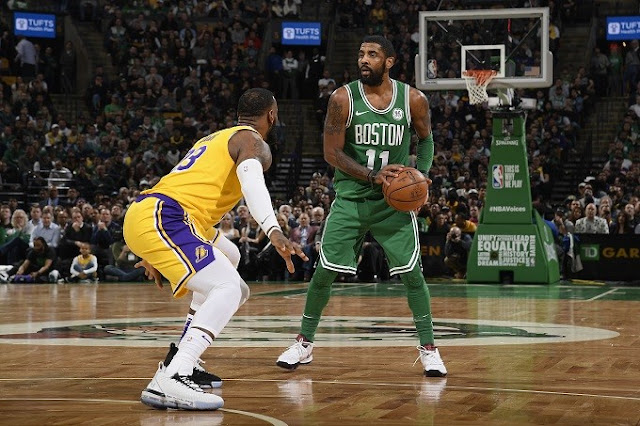 But with news of Durant's ruptured Achilles tendon and the likely lost season of rehabilitation (and threat of diminished capabilities) may have forced a second look at Irving's options for the young Celtics star, and if the Boston Herald's Steve Bulpett has accurate intel from his sources, that may be exactly what's going on.

"According to multiple league sources, Irving still has not removed the Celtics from consideration as he contemplates where to sign as a free agent, though the assumption around the NBA was he was looking to go elsewhere to join up with another marquee free agent."


Steve notes Boston would prefer more clarity regarding Irving's thinking, and perhaps, with the landscape shifting so suddenly and drastically, they could be getting it. But knowing how inscrutable Irving is on an average day, more likely than not they aren't much more clued in on what Kyrie is thinking than we are.

For his part, Irving may not have even had the needed time to parse such a potential blow to his plans, and even if he hadn't seriously considered teaming up with Durant this summer, the shadow KD's injury casts on the league's coming season ought to be enough of a factor to give any free agent pause.


Unlike Kyrie, however, Boston may be forced to choose a path fraught with great risk if they want to remain in the short-term contention window. Many fans would prefer a short rebuild around the young core, but Danny Ainge has never shied away from the big move he feels will put the team into position for a banner, and it's the league's worst-kept secret trading for Anthony Davis has long been such move for Ainge.

While Irving can wait and see how the Celtics and other teams assemble rosters in which he could have the type of situation he's looking for, the teams vying for both he and Davis' services have may have only days -- or even hours -- to cement the results of years of work.