Report: Pelicans owner would trade Anthony Davis to the Lakers "only over my dead body" 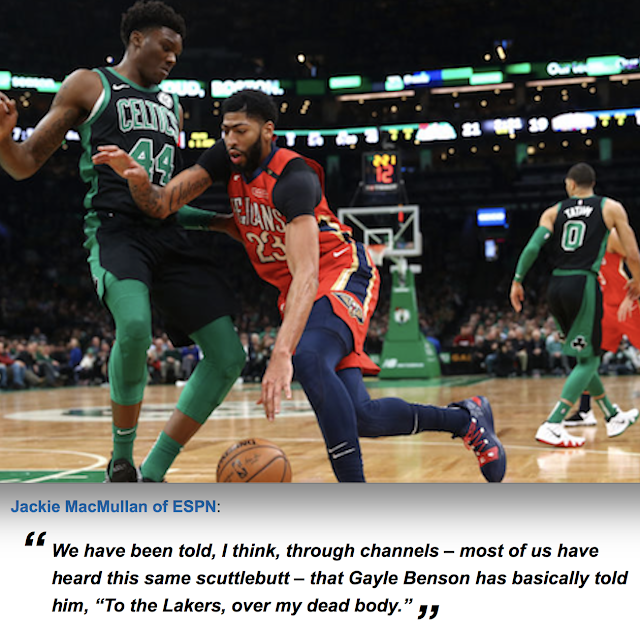 Jackie MacMullan was on Brian Windhorst podcast and had the following to say:

We have been told, I think, through channels – most of us have heard this same scuttlebutt – that Gayle Benson has basically told him, “To the Lakers, over my dead body.”


From a negotiating stand point this is horrible for new Pelicans GM David Griffin. He wants to be able to play the Celtics and Lakers off each other in order to get the best offer. Even if he has orders not to trade Anthony Davis to the Lakers. He doesn't want that out there.


Imagine Griffin asking Ainge for Tatum, Brown, Smart, and picks and Ainge responding, "How about just Tatum and a couple picks?" Griffin fires back, "We can get more from the Lakers." To which Ainge laughs, "But you're not allowed to trade with them. That's our best offer. Take it or leave it."

Expect the Pelicans to quickly refute this "over my dead body" report, so that it doesn't appear that their organization is dysfunctional and that Griffin has to trade Davis with one hand tied behind his back.

Related: Report: Pelicans expected to reach out to Celtics on Anthony Davis trade
Can Danny Ainge pull off a Kevin Garnett-like trade for Anthony Davis?
Report: Anthony Davis still wants out of New Orleans despite Pelicans winning the Zion lottery
Kyrie Irving per Jackie Mac: "I wish I could have done that differently."