It is always interesting to get the other guy's take. After the second-consecutive loss by the Indiana Pacers at the hands of the Celtics, the Indy Star's Gregg Doyel had a few thoughts on the final 12 seconds of the game, and a bit on what preceded it. The blockquotes are Doyel's. 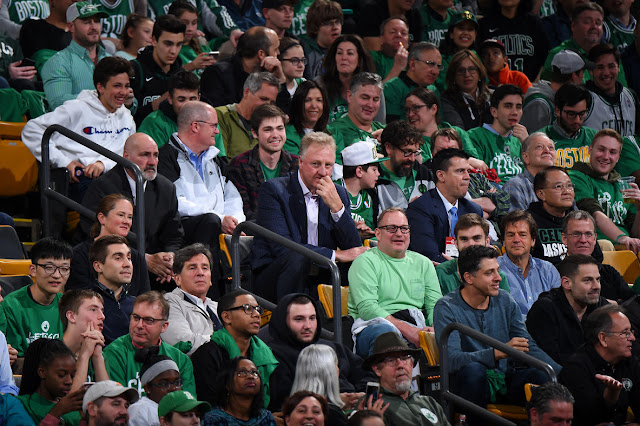 Even former Celtic Larry Bird being in the stands at TD Garden couldn't help the Pacers. Here are four parts to what the IndyStar's Gregg Doyel views as the problems with his Pacers in this Game Two of the series:

This loss to the Celtics required (A) an unfathomable cold stretch from a team plumbing new depths of offensive ineptitude this postseason. And then it required (B) a bevy of defensive breakdowns. And then – oh no, we’re not finished yet – it required (C) the worst inbounds play you’ve ever seen. Followed by (D) an equally bad inbounds play on defense.

If Doyel sounds frustrated, can you blame him. But he may be exaggerating on the ugliness of the inbounds play (see malady C). There must be worse ones somewhere in the NBA's history. Here is Doyel's take on the horrid final 12 seconds of the game:

But those final 12 seconds …

It started with 12.1 seconds left and Boston’s Gordon Hayward getting free – as in, completely ignored by the Pacers – under the rim for a layup and a 94-91 lead. The closest Pacer, Myles Turner, was looking around in dismay because Hayward wasn’t his man. Who was defending Hayward? Couldn’t tell you. Whoever he was, he did it so poorly, he wasn’t in the vicinity.

Now the Pacers are coming out of a timeout, trailing 94-91. Whatever play McMillan called, it couldn’t have been this: Wesley Matthews in-bounding the ball, looking for Bogdanovic drifting across the court, launching a pass at the exact moment that Bogdanovic stopped drifting. Matthews’ pass sailed over Bogdanovic’s head and into the Celtics bench, where Marcus Morris caught it. Matthews freaked, of course, flapping his arms like an angry bird of prey.

Another timeout. Another play call, this one by Celtics coach Brad Stevens. This one, designed to avoid a foul by the Pacers, saw a series of quick Boston passes – boom, boom, boom – ending with Al Horford finding Jayson Tatum alone at the rim for a dunk.

Well, almost alone. Bogdanovic arrived as Tatum was rising for the dunk, fouling him, giving Tatum a three-point play for a 97-91 lead.

What we don't want here are Boston sports writers having such negative takes after Friday's Game Three in Indiana. Our guys in green had better be prepared for a battle. The Celtics will try for a sweep, and the Pacers will look to tie the series.

Anyone recall a worse inbounds play than what Matthews pulled off? There must be! Anyone? Bueller?