The Celtics lead the series 2-to-0 against the Pacers in Round One of the Eastern Conference playoffs, and shutting down Indiana's offense in the 3rd quarter of Game One and the final quarter of Game Two played a huge role. Despite Terry Rozier's lackluster offensive games, he has been a workhorse on defense, particularly in Game Two. 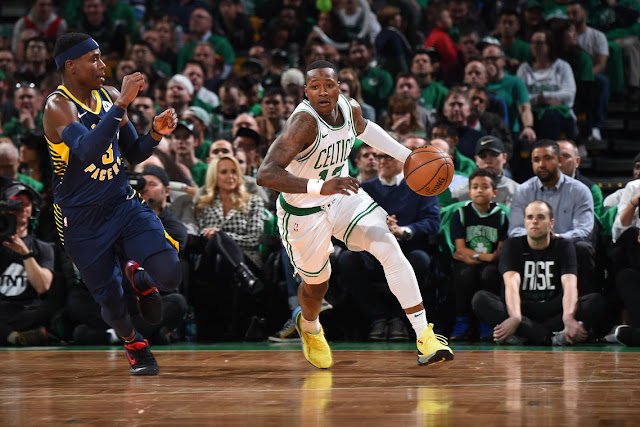 A look at the #Pacers shotchart in the 4Q. They were 0-for-9 on 2-point shots and seven of those were basically at the rim. Bogdanovic was 2-for-6, rest of #Pacers 2-for-11. pic.twitter.com/cyYufvkf61

Boston went on a 26-8 run in the third period of Game One after a horrific first half - going on to win 84-74. They then went on a 29-9 splurge in the final period of Game Two - taking the contest 99-91. The Celtics terrific team defense, and the fact Indiana has no take-charge guy to bring them out of the doldrums, made the difference.

There are few better one-on-one defenders than T-Ro when he is focused on the perimeter. He commented previously about this season not being fun, whereby Danny Ainge commented that with Marcus Smart out with an injury, Terry may start having fun in the post-season.

Jaylen Brown needs a nod here also. His offensive production thus far has been minimal in the two playoff games, but his defense has been solid. He has collected 14 rebounds over the two games, and his size is perfect for the tough switching defense we have witnessed - at least over the two quarters already mentioned. Things will get tougher with the next two games in Indiana. The guys in green, though still inconsistent, seem ready.