Don't get me wrong. I absolutely love the NBA of today. The action, athleticism and excitement is exhilarating. But the John Havlicek/Bill Russell/Johnny Most era had some real charm. Upon the truly sad news of John Havlicek's death at the age of 79, take a few minutes to listen to all three of these icons during the memorable time when Havlicek stole the ball. 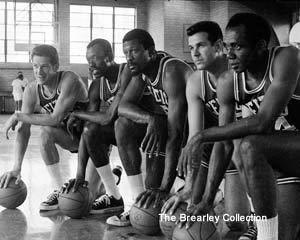 Many fans forget that the whole moment started with Russ hitting the backboard wire on his inbounds pass, thus losing possession of the ball. I do remember vividly Jarrin' John telling folks he counted to five on the oppositions inbounds pass, timing the steal perfectly. Most's hyper analysis of the play has been heard many, many times.

The verbal replay by Russ and Hondo is terrific for many reasons, one of which is that the two teammates and friends, one black-one white, both true gentlemen, shared a real bond. My guess is that Big Bill (Most's moniker for Russ) will take this loss quite hard, as will we. Now, both John and Johnny are gone. Stay healthy, Russ.

Photo via The Brearley Collection