I always want to find out what the rival media have to say about an upcoming series. Apparently, at least one writer for the Milwaukee Bucks feels that the Bucks were the better team last post-season and that they were merely out-coached by Brad Stevens. Thus the feeling out west that this a a grudge match which begins in Milwaukee this Sunday. 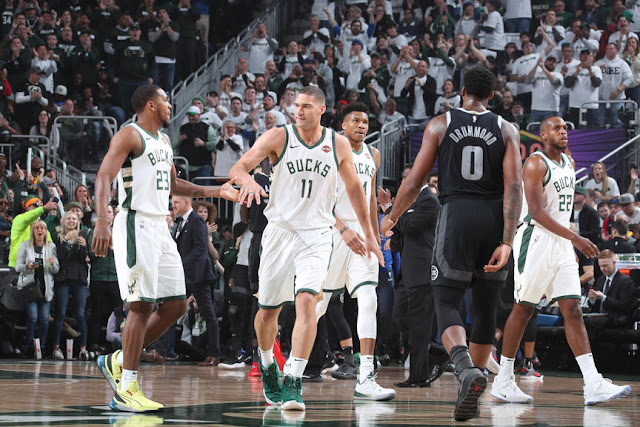 The Bucks felt they were the better team last post-season, and maybe they were - talent-wise. The Celtics were without Gordon Hayward and Kyrie Irving, but the healthy crew put together a memorable performance - over-achieving all the way to Game 7 of the East Finals (per Milwaukee Sentinel-Journal's Matt Velazquez):

Antetokounmpo and Khris Middleton put forth sensational offensive performances in that series, but couldn't get enough consistent input from their supporting cast to steal a win in any of the team's four games in Boston. Eric Bledsoe was largely outdueled by Irving's backup, Terry Rozier, and the Bucks couldn't get enough out of their bench outside of the BMO Harris Bradley Center.

By the end of the series, (Giannis) Antetokounmpo and others felt the Bucks were still the better team but that didn't stop them from going home to watch the Celtics advance all the way to Game 7 of the Eastern Conference Finals.

Velazquez' take on the Celtics winning the series was that the Bucks under Joe Prunty were simply out-coached by Brad Stevens, and that the addition of a new coach, Mike Budenholzer, and three new players (Brook Lopez, Ersan Ilyasova and Pat Connaughton) will make the difference - giving Milwaukee four wins in the East Semi-Finals.

The Bucks replaced coach Joe Prunty – a midseason replacement for Jason Kidd who had been outcoached by Celtics coach Brad Stevens in the playoffs last season – with Mike Budenholzer, whose implementation of new offensive and defensive schemes has buoyed the Bucks. Milwaukee also added free agents Brook Lopez, Ersan Ilyasova and Pat Connaughton, each of whom has slotted into the rotation well as effective long-range shooters and defensive contributors.

John Havlicek averaged 47.1 minutes per game in the 1974 Finals, a classic 7-game series in which he was named MVP. Boston’s opponent was...the Milwaukee Bucks.

Game 3 should be an all-time atmosphere.

Here's the grudge match part from Velazquez. His general idea is that the Bucks were the better team - the Milwaukee bench was weak for the four Milwaukee losses at TD Garden - Prunty was out-coached by Stevens - and no way should the Celts have won the series while being without two All-Stars. There is definitely some bitterness here.

Grudge match
Last year, the Bucks and Celtics squared off in a first-round series. Boston, the No. 2 seed, was playing without all-star guard Kyrie Irving and former all-star forward Gordon Hayward due to injuries but was able to defend home court, winning all four games at TD Garden en route to dispatching Milwaukee in seven games.

So it all starts on Sunday - Game One of the Eastern Conference Semi-Finals. Milwaukee has a new coach and three new additions to the team. Boston has Gordon Hayward, Kyrie Irving and Daniel Theis back in action this time. And in reference to the above tweet, there is only one guarantee that I can make about this series. Game 3 at TD Garden won't be about grudges. It will be all about winning in the style of the late John Havlicek - and the place will be rocking. No time for sadness. Just the joyous remembrance of a true Celtics icon - and the legacy of winning that the current crop of guys-in-green carry on.