What the Hell Happened to...Todd Lichti? 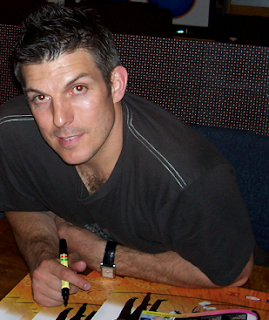 In this week's What the Hell Happened to segment, we remember Todd Lichti.  Todd was the #15 overall pick out of Stanford back in 1989.  At the time he graduated, he was the all time leading scorer at Stanford.  After a solid rookie season in which he averaged 8 points in 16 minutes a night, Todd was involved in a car accident with his girlfriend at the time, Kirstin Gravrock.  Gravrock was driving while she fell asleep at the wheel in Nevada and died.  Todd was in the passenger seat and suffered injuries.  Not career-threatening injuries but he admits:

"That may have had an impact on me going to Europe (in 1994) and moving on, " he said. "All of a sudden the NBA didn't seem maybe as important as it was when I was striving to get there." 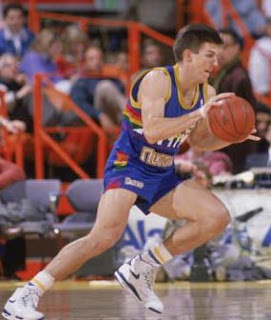 The next season Todd started off strong with Denver averaging 14 points but injuries derailed the rest of his career.  He was traded the summer before Denver's miraculous playoff run to Orlando for Brian Williams (Bison Dele).  After 4 games with the Magic, he'd make the seemingly-mandatory Golden State stop for 5 games, before signing with the Celtics on March 29, 1994.

I must admit: I don't remember Lichti playing for the Celtics back in that 1994 campaign, even though I did get to see a good bunch of their games on WSBK (I was too obsessed with hoping Jimmy Oliver would pan out).  I remember him being drafted out of Stanford and playing for the Nuggets.  I remember his Star Pic card that I had.  Thankfully I can't be too hard on myself since he only played 4 games for Boston during that dreadful 1994 season.  [Tangent time: Even though that team finished with a better record than the 1997 and 2007 teams, I still feel they were the worst Celtic team I saw.  They had an elderly Robert Parish and a surprising Dino Radja.  The 1997 team had rookie Antoine who would have a better NBA career than Dino.  And the 2007 bunch had Pierce and a lot of promising youngsters.  That 94 team was all NBA has-beens.  I think they'd lose a 7 game series to the other teams based on how they played.]

That ended the NBA career of Lichti though he'd go over to Australia to play with Andrew Vlahov a teammate of his at Stamford who convinced him to play for the Perth Wildcats.

I feel this article accurately (even if depressingly) sums up Lichti's NBA career.

Today, Todd lives in Melbourne, Australia with his wife Sue (who designs clothes) and has developed an Australian accent.  Don't believe me?  Watch him here speak about his son Bronx (fast forward to 2:30):

His son's name is Bronx (pretty cool).  Maybe he was trying to somehow bring his American roots to Australia by giving him that name.  If you go to the actual Youtube page, you can see a comment by Kristie Nausin Huddy who claims to have been neighbors with Todd when they were 6 years old.  This has no relevance to anything, but I thought it'd be appropriate to place in this article.  Other than that, Todd and his wife run a small wine distribution business.
For a list of all the "What the Hell Happened To" Series please click here.