Super-confident Kyrie Irving would not allow HIS team to lose vs. Raptors


This is the one we've been waiting for. The 117-108 victory over Eastern rival Raptors on the home court had its flaws, but Kyrie Irving wasn't one of them. He put the team on his back and carried them to the win. 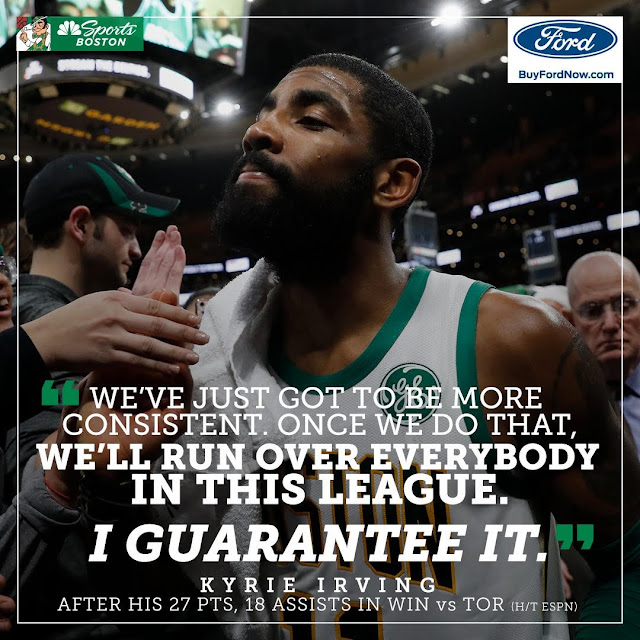 Kyrie poured in 27 points on 58% from the field and 50% on 3-pointers. He grabbed five rebounds and passed off for a career-high 18 assists. This was a game that could have gotten away, but Irving wouldn't allow it. Not this one. How good was he in the final quarter?

Kyrie Irving has scored or assisted Boston's last 25 points of the game.

With the score at 101-97 in favor of Toronto at the 4:51 mark of the fourth quarter, Kyrie hit Al Horford for a 3-pointer to start the surge. Jayson Tatum hit on a drive and a three - Kyrie with a jumper - Irving with a long 3-pointer - Kyrie hits Al for a layup - Irving with a perfect lob to Al for the jam. I marvel at the synergy between Al and Kyrie.

Kyrie Irving: “We’ve just got to become more consistent, and once that happens, we’ll run over everybody in this league. I can guarantee that.” pic.twitter.com/CeNwxz9G5p

Kyrie didn't get the win all by himself. The bench was instrumental, but that is another article for later this morning. But Irving was the man leading his troops to victory - make no mistake. This was not totally a will-the-team-to-victory scenario, but more a I-refuse-to-allow-my-team-to-lose-this-one power move. And it worked.

So is Kyrie right? Once consistency hits, the Celtics will run over everybody in the League? Well, with Irving at the helm, it can happen. Lately, he has not only shown that he is a superstar, he has shown he is a true leader of HIS team. This was a great game, and a much-needed victory. Take a look at some of Kyrie's key plays below:

Kyrie Irving was in his bag against TOR as he posted a career-high in assists on the night:

Here's a look at his best plays from the performance (@TheJManJBT)