Celtics bench came through big-time in win over Toronto


First of all - nice to have Aron Baynes back. In the 117-108 win over the Raptors, he came off the bench to score nine points, grab five boards and hand out two assists. And three of those points came on a three-pointer. Oh, and yes - he had a Net Rating of +27.2 for the game. His size, toughness and attitude give a lift to his teammates. 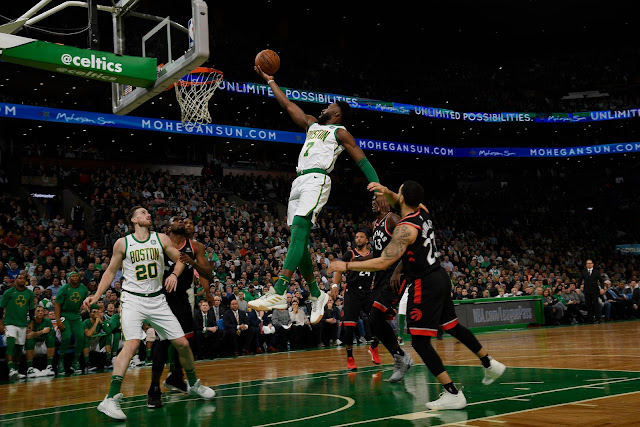 Jaylen Brown did not have a particularly good offensive game (seven points, five rebounds), but he definitely contributed to the victory. Like his fellow bench-mates, he had a solid Net Rating of +27.8. He also had one beauty of a block. If he is ever able to shed that tentativeness I see in his game, he could be a terror for defenders.

Gordon Hayward had a solid game with 18 points on 62% from the field and 40% on threes, adding two rebounds, five assists and a Net Rating of +20.4. Terry Rozier also had a high Net Rating of +26.8, but was only able to notch five points and three boards.

We sure missed big man Aron Baynes. But he returned Wednesday and canned a big 3-pointer that helped to turn the game around for us. pic.twitter.com/vLGhSgE8ke

Gordon's explosiveness, particularly on vertical leaps, still seems like a work in progress, but he uses his craftiness to his advantage. Keeping more to a ground game may be a good idea for now. But his skills were on display last night. He seemed comfortable out there.

Kyrie has told his bench crew to play hard all the time, and they will win games. They listened last night, and Jaylen, Aron, Gordon and T-Ro all made significant contributions to a much-needed win over a tough rival. We hope it continues.