The Boston Celtics righted the ship with a big primetime victory over the Eastern Conference-leading Toronto Raptors 117-108 on Wednesday night. Kyrie Irving put on a stellar performance both scoring and passing the ball, and Al Horford returned to form for a vintage performance on the biggest stage. 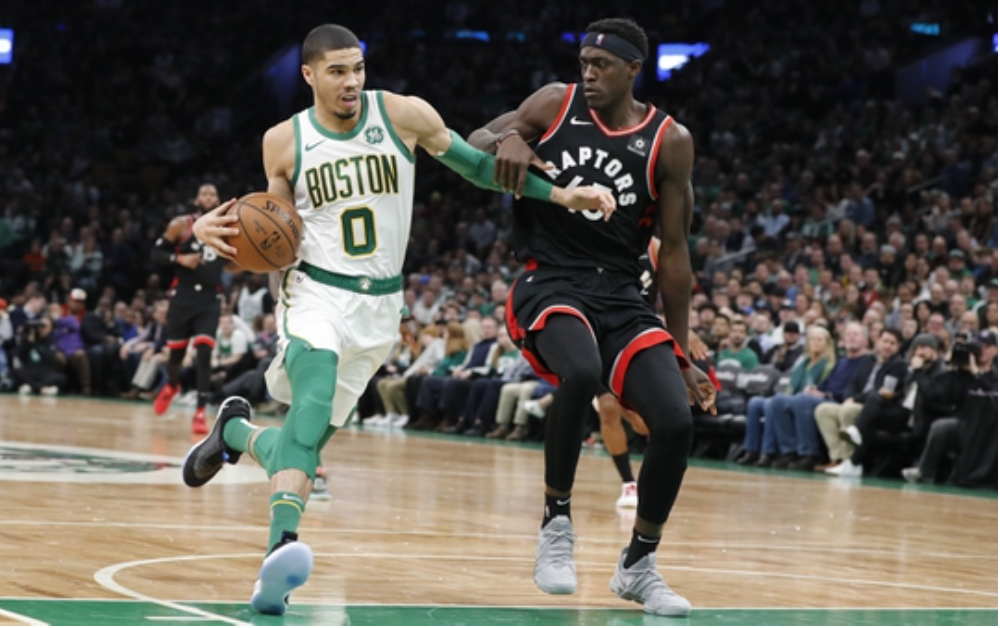 Kyrie led Boston with 27 points and a career-high 18 assists. Horford added 24 points, including seven clutch points late in the fourth, and Gordon Hayward chipped in 18 off the bench. Kawhi Leonard led all scorers with 33 points, and Serge Ibaka added 22 points and eight rebounds.

For the first time in what has seemed like a decade, the Celtics entered their highly anticipated matchup with the Raptors with a clean bill of health. Aron Baynes (hand) returned from his extended absence, and both Marcus Smart and Kyrie returned after missing the team's last game against the Nets.

Considering Brad Stevens didn't call an "Mad Brad" timeout in the first 30 seconds, the start to the game was much better than their last. Leonard made his presence known early on in the first quarter, scoring seven quick points and getting two steal on the defensive end. The rest of the Toronto squad followed Leonard's lead, and hit 8-11 shots to start the game and take an early 18-7 lead.

The Raptors have started 8 for 11 from the field and Brad Stevens just called a timeout.

With three straight losses under their belt and the never-ending drama surrounding the team, this was a rough way to start the game. Within minutes the Celtics were looking at a double-digit deficit, and were forced to fight from behind. On the bright side, after having a combined 11 points on just 11 shots against Brooklyn, Horford and Hayward came out looking to shoot early. The two combined for 12 points on 5-6 shooting and looked to be a much bigger part of the offense in the first 10 minutes.

A 13-9 run from Boston cut the Raptor lead down to six as the first quarter came to and end. The Celtics' offense was performing well (56 percent from the field, 57 percent from three), but too many turnovers and a defense that was just a step slow took away their advantage on the offensive end. Toronto also went 6-6 from the free throw line, while Boston couldn't find their way to the charity stripe.

A (reinvigorated?) Jaylen Brown and Terry Rozier gave Boston some great minutes off the bench to start the second quarter, and sparked a 14-3 run that gave them a 4-point lead five minutes in. Hayward and Baynes also gave the team some nice energy/shot making. Brown was assaulting the rim and getting to the free throw line, while Rozier looked staunch on the defensive end, making an impact on a number of Toronto possessions. Back-to-back 24-second violations forced by the Boston defense highlighted the early run, and the energy in this game turned on a dime, this time on the back of the second unit.

As the starters made their way back into the game, the pace of play slowed to a halt. Missed shots and turnovers highlighted the middle third of the second quarter, but the Celtics were able to maintain their lead, and eventually extend it to 11 with just over two minutes to play in the half. Hayward returned to the game late in the second quarter and sparked the C's once again. He scored nine points in the final three minutes of the half, including a vicious step back three and a buzzer-beating floater through contact.

After getting down by double-digits early, the Celtics bounced back and took control of the game in a way that we haven't seen over the past few weeks. They firmly dominated the Raptors in the second quarter, and the offensive explosion, and efficiency, was a welcome sight.

When Gordon Hayward's rolling the Celtics hit another level and he had it going that half.

Kyrie and the Celtics increased their lead as high as 16 points early in the third quarter after some great ball movement and continued amped up defense. But a 20-6 run from Toronto, including seven points from Ibaka, cut the lead down to two with just over four minutes to play in the quarter. We all knew the Raptors weren't going to go quietly, and they stepped up their defensive pressure in order to close the gap.

With Toronto knocking on the door of a violent comeback, "Old Man" Horford ripped off seven straight points, including a loud, stare down dunk over Ibaka to get some breathing room. It's no surprise that the Celtics' struggles and chemistry issues have come during a point in the season when Horford has been injured/not been able to play at 100 percent. He is the ultimate glue guy, a phenomenal passing center who can be the fulcrum of the offense, and a veteran presence that adds stability to the locker room. When Horford plays well, Boston plays well.

Toronto's 9-0 run gave them a three-point lead midway through the fourth quarter, but a Baynes three from the top of the key tied the game 92-92 with just over six minutes to go. Much like a playoff series, the defense went up a level, and the game flow resembled that. Half way through the fourth quarter both teams had combined for just 14 points and five turnovers. After being on fire from the field in the first half, the Celtics dropped down to 45 percent from the field overall.

When we got down to the nitty gritty part of the game, we got what we had all been waiting for. Kyrie vs Leonard in crunch time on national TV. The two star players, some may argue the two best players in the Eastern Conference, traded tough bucket after tough bucket down the stretch. Leonard was almost superhuman in his ability to finish through contact, and Kyrie scored with his usual level of razzle dazzle.

A Tatum three-point play and a transition three gave the Celtics a two point lead with just under three minutes to play. After a relatively quiet night, Tatum came through in his usual clutch fashion. From there, Kyrie did his thing. He danced on Ibaka for a fadeaway jumper, and then stared down Leonard and drained a three from five fight beyond the arc to give Boston a five point lead. As if that wasn't enough, he followed that up with two dimes to Horford for assists number 16 and 17, a career high. Once again Kyrie, and this time with an assist from Horford and Tatum, put away the number one team in the Eastern Conference.