If you haven't seen Bird Box, this is your chance


No - not the movie - the Bird Man himself, Larry Bird. It was only a pre-season game between the rival 76'ers and the Celtics, but the intensity suggested playoff basketball. It was October 16, 1983 at the old Boston Garden, and it started with a wrestling match between Cedric Maxwell and Moses Malone. Watch for Danny Ainge, never one to miss a physical altercation - but he was passive in this one. 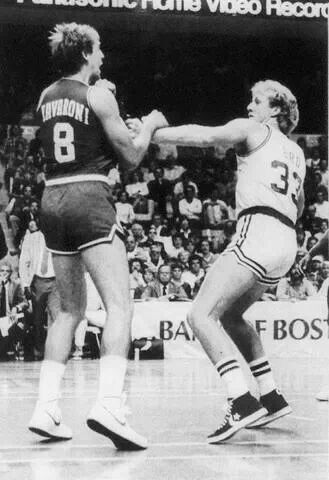 When Bird and Iavaroni went at it, Philly coach Billy Cunningham got into the fray, and here comes General Manager Red Auerbach at age 66 down from the stands to confront Moses Malone. Somehow, Cunningham's sport coat got torn in the fracas.

Red ended up taunting and challenging Malone - who chose not to accept the suggestion (per UPI.Com/Archives):

'First, they knock (Cedric) Maxwell down and then that other guy (Iavaroni) is doing a job on Bird and all that kind of stuff is going on. I couldn't help it. I just got mad,' he said.

'Those incidents were uncalled for,' Katz said. 'You can't touch the Celtics players in Boston Garden, apparently that's the new rule.'

Katz also said he was shocked when Auerbach ran onto the court.

'I've never seen it done before. I mean, the man was sitting in the stand and he ran onto the court.'

But Maxwell said he really wasn't surprised at the fighting 'because with our two teams, it's possible for anything to happen once we step onto the floor.

'I wouldn't be surprised if something happens in warmups one day.'

Bird, Iavaroni and the Celtics Gerald Henderson were ejected, and Red picked up the largest fine ($2,500). All of this ignited in the first few minutes of a pre-season game. But as Max suggested, at least for this altercation, the participants waited until warm-ups were done.

Photo via Pinterest
Videos via CelticsLife and Ryan Van Dusen