The Celtics New Years Eve loss to the Spurs may have been a bit of a turning point for the guys in green. Brad Stevens seems to think that his players watching San Antonio sharing the ball benefited his guys. 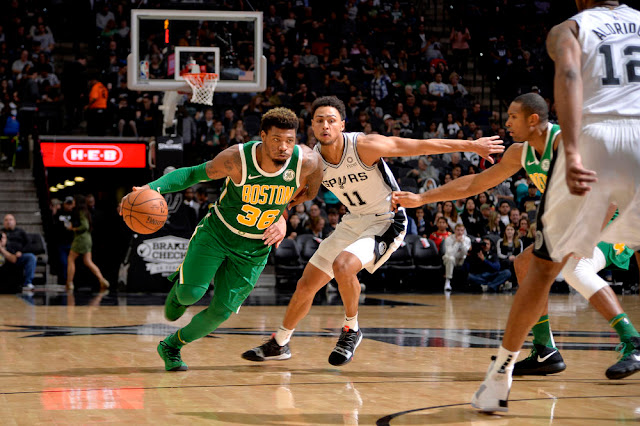 Brad Stevens says it benefited the Celtics to witness San Antonio's ball movement on New Year's Eve. They've been whipping the ball around ever since, with 30+ assists during every game.

No player can dribble the ball faster than the rock travels through the air with a crisp pass - not even Kyrie Irving. The Celtics actually racked up more assists that night than San Antonio. It was 30-27 in favor of Boston.

Al Horford said the Celtics are all understanding they’re trying to play faster with ball movement and it’s working for them.

The third quarter was the turning point in this game. The Spurs turned an 8-point deficit (54-46) into a 10-point (92-82) lead. All while handing out 13 assists in the period, five of which came from DeMar DeRozan.

The Celtics are sharing the rock more often - and more effectively - and they are winning. With the mention in the above tweet of the 86-87 Celtics, I found the team averaged 35.5 assists/game, with infamous gunner Danny Ainge ranking 3rd on the team with 5.6 APG. He was second on the team the following season at 6.2 APG. For both seasons, Larry Bird and Dennis Johnson joined Danny as the top-3 assists guys.

Brad Stevens is a brilliant coach - smart enough to keep learning - particularly from Mastermind Gregg Popovich. He liked what he saw in San Antonio's blistering 46-point third quarter with its 13 assists. The lesson is simple. Pass the ball - the ball moves faster - the games moves faster (and gets more exciting) - and deficits can be overcome. The Celtics have the facilitators in Irving, Marcus Smart, Al Horford and Gordon Hayward. They can get it done.