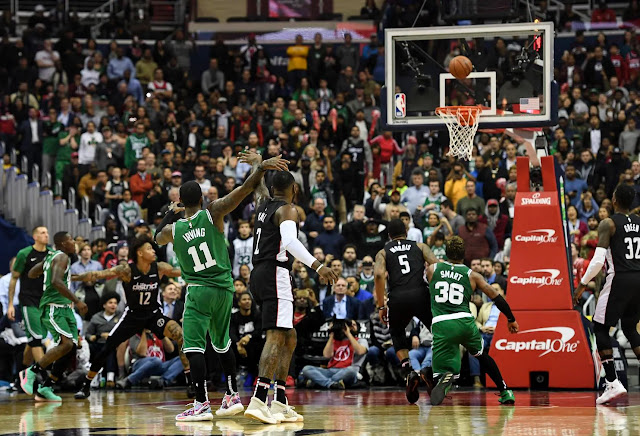 Kyrie? More like Ky-three, am I right? The Celtics captain may be shooting 39.1% from beyond the arc, but that number seems oddly low if you've been witnessing his brilliance from downtown when it matters most. Just ask John Wall.

Yeah, Kyrie Irving has proverbial ice-water in his veins and clutch chromosomes throughout his DNA. In case you missed it, here's what he did late against Washington.

Naturally, I cheered when Irving made these shots, as did a large portion of the Wizards stadium, who were chanting "MVP" no less. But I also couldn't help laugh at the ease in which he handles the absurdly difficult. Coach Stevens echoed that comical sentiment.

“Those last two shots were amazing,” Brad Stevens says of Kyrie’s late 3s. “The one from in front of our bench was a joke.” pic.twitter.com/SyxFUIGVSw
— Boston Celtics (@celtics) December 13, 2018


Tuesday night's barn-burner in the nation's capital -- where Kyrie scored the Celtics final dozen points in the last 2:58 of OT -- wasn't the first time Kyrie magically did the Wiz dirty on their home floor.


And who can forget his most iconic three-ball?


I mean, Game 7 of the NBA Finals. On the road. Against the mighty Warriors. With the weight of the entire state of Ohio on his and Lebron's back. And? Once again, ice water.

Kyrie Irving is special, no doubt about it. But as it turns out, he was destined to be after his parents gave him that name. What is the etymology of Kyrie, you may ask? Well, it just happens to be Greek for "Lord, have mercy." Which is precisely what the opposition mumbles every time he breaks their backs with yet another downtown dagger. I'm just grateful he's now doing so in Celtics green.