In a recent CelticsLife article, Justin Quinn wrote about Bill Simmons' prediction of an imminent trade of Terry Rozier. We are hearing from all sides of the issue. Terry is supposedly unhappy with his minutes - Danny Ainge disputes any mention of teams calling him about Terry's availability - and now we read that at least seven teams have inquired about T-Ro. 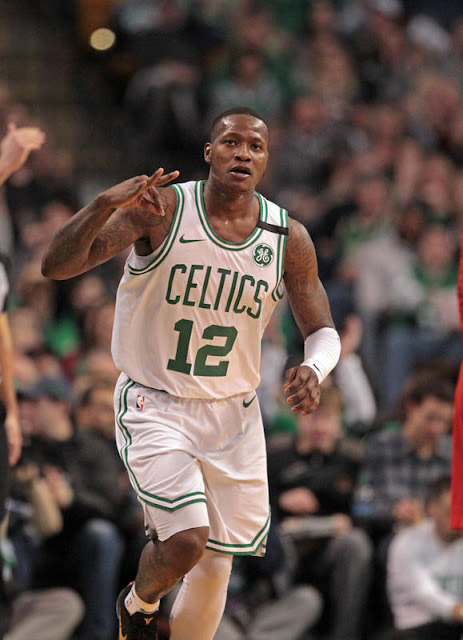 Danny Ainge on @Toucherandrich said that no teams have called him about Terry Rozier since start of the season and Ainge doesn’t know anything about seven teams monitoring him.

The main point here is that Terry Rozier, by necessity, thrived as a starter in last season's playoffs. He averaged 37 MPG, 16.5 PPG, 5.7 RPG, 5.7 APG, 1.3 SPG - all while playing great defense, committing only 2 fouls per game and turning the ball over roughly once a game. Was that a fluke?

It doesn't look like it. His per-36-minute numbers from the 2017-18 season are very similar (15.7 PPG, 6.5 RPG, 4.0 APG). These numbers don't tell the whole story, but they can't be denied. Terry looks like a solid starting combo guard or a valuable, big-minutes sixth man.

It all boils down to sifting through the debris being tossed around. It is in Danny Ainge's interest to quell any suggestion of discontentment in Terry since that waters down trade opportunities.

Unexpected early-season Celts subplot: Terry Rozier (restricted FA next summer) has been unhappy w/ his PT all season, word has gotten around the league, and everyone now knows the Celtics need to trade him... which, of course, makes it harder to trade him.

We can be certain that inquires have been made by at least several teams, and look carefully at what Danny had to say about that.

Have any teams called Danny Ainge about a trade for Terry Rozier?

"Not since the season started, no." #Celtics

"Not since the season started. No." might infer calls were received prior to this young season, and it may also indicate that it may have been Ainge making his own calls to the inquiring teams since the start of the season. Danny chooses his works carefully.

Terry has been vocal about wanting to be a starter somewhere. His minutes are down slightly from last season, but his production has been cut even further. His best run was as a starter in the playoffs. His current run in the early stages of this season doesn't even come close to that. Add the fact the team has under-performed, and anyone can easily see how and why T-Ro would want more responsibility and floor time either in Boston or elsewhere. Bill Simmons may be correct.