The NBA offseason is almost over. The NBA schedule is officially out, and we are inching closer to opening night. Lebron James is officially out of the Eastern Conference and since then many have debated who will run the East in the post Lebron era. 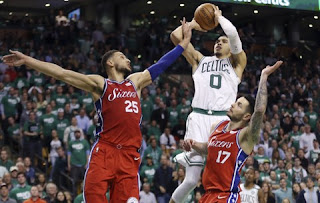 The Toronto Raptors added one of the best players in the NBA by adding Kawhi Leonard. The Washington Wizards got more interesting by adding Dwight Howard and the Philadelphia 76ers will return an extremely promising roster with two of the best young players in the NBA. However, none of them belong in the same sentence as the Boston Celtics and it really isn’t that close.


I understand the fact that the Raptors won 59 games last year and then added Kawhi, but there will be an adjustment period by switching superstars and having a new head coach at the helm. People forget how much a head coach impacts the game and it will be intriguing to see how Leonard fits into a team that isn’t coached by one of the best coaches of all time with a completely new offense around him.


The Indiana Pacers are a pesky team that brought the Cleveland Cavaliers to the brink of elimination, but the Celtics will be returning two all stars on top of a team that could have beaten them last year. This will be simply too much for them to handle. The Wizards adding Dwight Howard will make them stronger on defense and give John Wall a new weapon, but they don’t have the firepower to match up with the Celtics either.


Finally, we have the 76ers. A team that the media has loved to label as an Eastern Conference favorite. Yet, regardless of what Skip Bayless has to say about them, this team is wildly overhyped. Philadelphia will not be in the same class as Boston this year and it may be completely lopsided when its all said and done. There is little indication to believe that they have enough firepower to compete with this team. Last year they played them head to head in the playoffs and were missing quite possibly their two best players. They won that series 4-1. How does adding those two guys make this matchup more competitive by any stretch of the imagination?


The 76ers have two of the most talented young players in the NBA in Joel Embiid and Ben Simmons but it simply isn’t enough. The Celtics will have two of the most promising prospects in the NBA in Jaylen Brown and Jayson Tatum to go along with veteran all-stars Kyrie Irving, Gordon Hayward and AL Horford all in the same stating lineup. There are plenty of talented and promising teams in the Eastern Conference, but the fact remains that none of them are on the same planet as these Celtics are. The combination of youth, talent, leadership and the best young coach in basketball will prove to be too much for any other team. This of course will be barring any major injuries as we all learned last year.
Photo-- Elise Amendola/AP