Jayson Tatum has improved his strength over the summer


Prior to the end of the Celtics season, rookie Jayson Tatum indicated he would be building his strength over the summer. It looks like he has done just that. 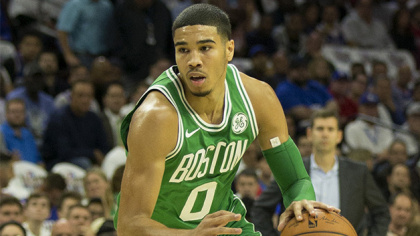 Tatum said he's gotten stronger this summer. "That's probably been the biggest focus. I'm still young so it's hard to really just throw on a bunch of extra pounds. But I've definitely gotten a lot stronger. ... I just wanted to get my body right and keep getting stronger."

But don't expect to see a more-muscular physique - not quite yet. As Jayson says, "it's hard to really just throw on a bunch of extra pounds (of muscle)". He is absolutely correct.

In an article I posted today in my other blog, I stressed that in the fight to improve strength, lose weight, drop body fat and gain muscle, strength gains are the easiest to achieve and putting on muscle is the hardest.

My clients often comment, "I am much stronger, but I just don't see any difference in the muscle". They are puzzled. Muscle lags behind strength in most people, but we should visually see a difference in Tatum in the coming months. But for now, the added strength will serve him well this season.