One of the greatest to ever play the game, Larry Legend was a 12-time NBA All-Star, nine-time All-NBA First Team, three-time Most Valuable Player in both the regular season and playoffs, and a three-time NBA champion with the Boston Celtics. 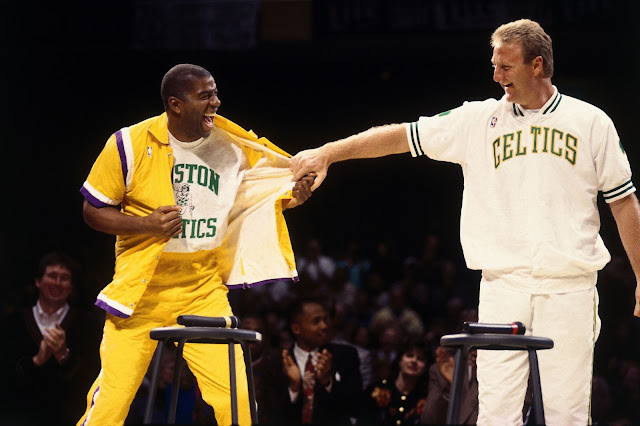 One of the game of basketball's most complete players in the modern era, Larry did it all, from scoring at all three levels to rebounding to picking pockets and even blocking shots.

Said Bob Cousy on his game, (per Sports Illustrated's Jack McCallum): "Before Bird I used to vacillate ... the question didn't seem relevant. But Bird came along with all the skills, all the things a basketball player has to do. I think he's the greatest."

This opinion was held by relatively neutral parties like John Wooden, who said, (per McCallum): "I've always considered Oscar Robertson to be the best player in the game ... now I'm not so sure that Larry Bird isn't."

These sentiments were even shared by his "enemies", such as Los Angeles Laker luminary Jerry West (also per McCallum): "He is as nearly perfect as you can get in almost every phase of basketball."

Bird was a ferocious competitor on the court, known for calling shots (and making them) in advance of plays to opponents, and some of the most brutal trash talk in the game at that time, as evidenced by teammate Kevin McHale's video above.

So, a tip of the hat to the Hick from French Lick 26 years later - you'll always be legendary in Boston.