The Jay-Team - their time is now 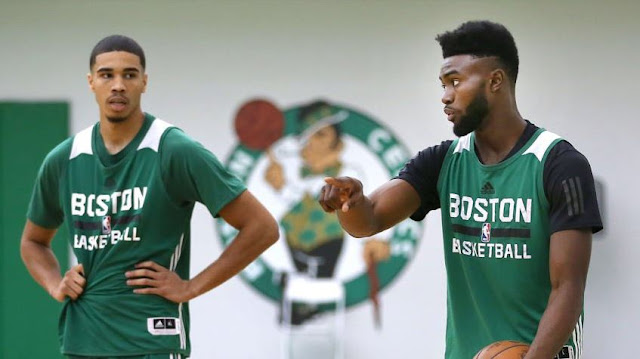 We all know better than to jump the gun when looking at rookies and second-year men early in the season. But after four games, we know we have two future stars in Jaylen Brown and Jayson Tatum. But their time could very well be now - this year.

Last night, both youngsters played great against the New York Knicks. Jayson's line was 31 minutes, 22 points on 60 % from the field and 66.7% from the three-point line. He also added four rebounds, four steals and two blocks. Jaylen was in the game for 32 minutes tallying 23 points on 56.2% from the field and 50% on threes. He added four rebounds, one steal and one block. They did everything out there, including solid defense.

Per @tvabby, Brown and Tatum are the first Celtics duo 21 and under to each score 20 in a game.

With the serious injury to Gordon Hayward, Coach Brad Stevens has openly stated that he needs these two players to be good now. They are doing just that, and their stellar play takes a lot of pressure off Kyrie Irving and Al Horford. From today's Boston Globe, Adam Himmelsbach had this to say about the Jay-Team:

Brown said he and Tatum are focused on making life easier for Irving and Horford. If the two become dynamic offensive players, it will force defenses to spend more time and manpower accounting for them. And any time they can shift attention from Horford or Irving, even if only slightly, it will only make them more dangerous.

One of our readers made the comparison between the Celtics pair of Brown and Tatum to the former Chicago Bulls duo of Michael Jordan and Scottie Pippen. Many may feel comparing an untested rookie to one of the three greatest players to ever play the game is too much of a reach. Well I don't see many rookies come into the NBA with this kid's talent, poise, confidence and demeanor. He does everything well. He is is taking threes and hitting them. He defends, makes steals and blocks shots. His shooting percentages are all very good. And he is an excellent rebounder. With these minutes (34.3 MPG), he will at least be in the discussion for ROY, and very well could take it. Maybe a bit early for an MJ comparison, but this kid is a natural talent

Scottie Pippen only played 20.9 minutes per game in his rookie year. He made his first All-Star game in his third year in the League. Jaylen has a good shot to make it this year. A Most Improved Player award is also quite likely. His game is really taking off. He is now making threes at a good clip, and that was much-needed. He does so many other things.

This morning on NBA TV, analyst Chris Webber compared Jaylen's spin move and jam to what James Worthy used to do. Chris also said, "This (TD Garden) has to be one of the best places to play at home with the home crowd.". Webber's statement is one of the reasons why NBA TV is one of my favorite info sources. By the way, look for my Jaylen-snatches-the-King's-crown comment contest results in an article later today.

The injury bug may have struck Anthony Davis again, and frankly, involving either member of the Jay-Team in a trade looks like it would be a mistake. Brad needs them to "be good now", and they are. I did not expect that either would be this good so soon. Their time is now.