Jaylen Brown finally knocks some rust off in win vs. Mavericks 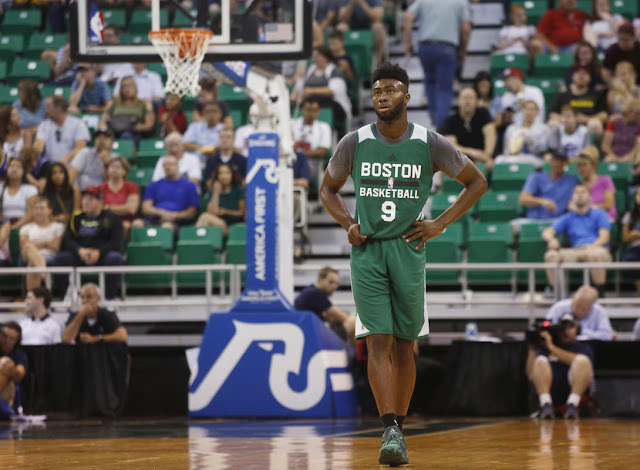 Jaylen Brown's first game in a Boston Celtics uniform showed some promise for the future, oozing potential of athleticism and defensive ability. He struggled to score, but his knack to get to the rim and head to the line satisfied fans with their third overall selection.

Brown's next two appearances were... unspectacular to say the least. He managed just 14 points, five rebounds, and three assists in both games combined. Sure, two games in Summer League says absolutely nothing about the future of any given player, to say the least. But seeing Kris Dunn dominate in his games for the Wolves, along with Jamal Murray and Buddy Hield showing flashes of brilliance for their respective teams, it made fans a little restless.

Last night, however, Brown got into his groove and gave impatient fans reason to hop back on the bandwagon. He finished with 20 points on 4-11 shooting, 12-17 from the line, 10 rebounds, two assists, four steals, just two turnovers, and one disgusting throwdown over 7-2 Satnam Singh Bhamara.


Jaylen Brown just made a poster, and the Celtics lead the Mavs 19-14 after the first quarter. pic.twitter.com/94AcVKMrfl
— Boston Celtics (@celtics) July 12, 2016

The 6'7 forward's ability to get to the free throw line is something that fans should appreciate already in his time in a Boston uniform. He and Terry Rozier put up 35 free throws between the two of them on Tuesday, 13 more than the entire Mavericks roster in the matchup.

Even after converting 12-17 of his attempts, Brown still thinks there is work to be done. He said following the game that his knee was good, but...

Aside from free throws and a man-child dunk, Brown was able to finish in transition and at the rim much more effectively than his three previous times on the floor, something that hopefully bodes well for the future.

Someone made a highlight reel of just missed shots at the rim in Brown's first three outings.

He can get to the rim with the best of them and knows how to take contact to head to the line. If he can combine the two for and-one buckets, or just finish at the rim for that matter, and manage to knock down open jump shots, he's on his way to becoming a star in this league.

Being able to make plays like this doesn't hurt either.

The Las Vegas Summer League tournament begins today, where the C's will face off against the Cleveland Cavaliers at 8:00 p.m. on ESPN2.

If Brown could use the confidence he built up in his last outing to help lead Boston to a Summer League title, that'd be great. More importantly, however, let's hope his confidence leads him to reaching his potential as the third overall selection and he becomes a key piece en route to an ECF appearance.