Trade Machine: Is Avery Bradley worth more to the Celtics as a trade chip? 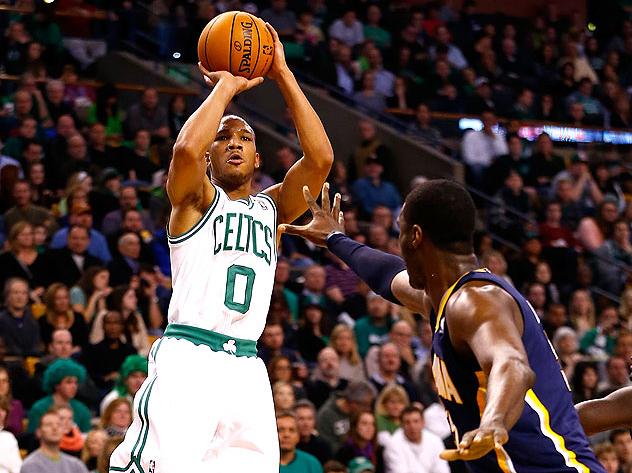 As the NBA trade deadline looms, lots and lots of rumors are starting to float to the surface. HoopsRumors reported earlier this week that the Dallas Mavericks could be interested in moving Shawn Marion and Boston could be a potential trade destination. While this is admittedly all speculation, it is worth exploring.

Still, the Celtics, with plenty of draft picks already in tow and the desire to unload Jeff Green and Avery Bradley, could present an opportunity. The Mavs once more have their eyes set on pursuing a marquee free agent this summer, so Green’s long-term deal probably isn’t of interest, but Bradley, a restricted free agent this summer, could shore up the club’s perimeter defense. Dallas would have the right to match offers if it wants to retain Bradley, and the flexibility to let him go in the pursuit of a splashier name. The issue with this scenario is that the Celtics would have to include more salary to make the deal work, and with few expiring contracts to spare, Dallas might be unwilling to take on a lengthy commitment to anyone signed beyond this season. Perhaps the Mavs and Celtics could pursue a one-for-one swap of Marion and Kris Humphries, a free agent at season’s end. That would allow the Mavs to preserve their flexibility and free the Celtics from their tight squeeze under the luxury tax line, allowing them to make other moves. Still, such a deal is just my speculation.

Let’s unpack this one. While Jeff Green for Shawn Marion works nearly perfectly as a one-for-one swap, it doesn’t fit the with what Dallas is alledgely trying to build. Green has an additional two years on his contract which would prevent Dallas making a run at a big name free agent.

Kris Humphries, who has been playing really well for the Celtics as of late, is another solid trade candidate, but why would the Celtics do this? Humphries and his $12M come off the books at the end of the season, just like Shawn Marion, so this trade doesn’t really help either side unless Shawn Marion is going to be the Celtics go to guy at small forward through another contract which they would have to sign him to.

The most interesting name mentioned here is Avery Bradley. Bradley is a restricted agent at the end of the season and will be getting more than his fair share of interest from other teams. Taking this opportunity to clear cap space and further make room to sign a premiere free agent makes the most sense of all players mentioned in this rumor.

Combining Bradley and Bogans in a swap for Shawn Marion works in the trade machine. It opens up more playing time for Phil Pressey and Jerryd Bayless, adds another scorer to the Celtics, continues to create mismatches at the shooting guard, small forward, and power forward positions, and clears a lot more cap space this coming off season. Avery Bradley’s defense and emerging offensive prowess has been great to watch, but he’s going to get lots of offers from other teams as a Restricted Free Agent- it might be better to move him now than negotiate for him later.

Any move for Marion makes no sense. He's 35 years old and hasn't been his same dynamic self since 2007-08. Since then, he's averaged 11.9 ppg, 7.3 rpg, 1.8 apg and 1.1 steals per in 31.3 minutes per game. Those aren't great numbers considering how many minutes he's out there. He also has injury issues, as he's missed 34 games in the past two seasons and is currently nursing a shoulder issue that is forcing him to miss games. There is no place for a guy like that on a rebuilding roster so any move for Marion would more than likely be a half-season rental.

Trading Marion for Humphries: For this scenario, I ask, to what end? Both guys are expiring so neither team is making any dents in their cap flexibility going forward. Yes, the Celtics save some money this season, but they're already under the luxury tax and if Danny Ainge really needs to save even more money there is always Bogans' contract.

Swapping Humphries for Marion might also make this team better this season and hurt their chances at landing a top pick in a loaded draft. The team wouldn't lose much in terms of rebounding and Rajon Rondo might find a real running mate in Marion that he hasn't been able to find in Jeff Green. Marion's best years in the league were when he was running all over the place in Phoenix with Steve Nash. Marion hasn't played with a point guard of that caliber since, unless you want to count “the ghost of Jason Kidd” in Dallas. As old and oft-injured as he is, Marion's probably not looking to retire and wants another contract after this year so he could see Rondo as his ticket to sticking around in the league.

If this is the best offer Ainge gets for Humphries then hold onto him and let him expire. Humphries has played well enough to have some value in a trade in Ainge's eternal search for assets, but swapping him for another expiring contract accomplishes nothing going forward.

Trading Marion for Bradley: This one is straight up preposterous. Trade a 23-year-old off-guard who is a defensive demon and has taken significant steps in his offensive game this year AND who the team controls financially as a restricted free agent at the end of the year for a 35-year-old wing who plays no part in the team's future except coming off the books at the end of the season. What? Maybe I am overvaluing Bradley, but he HAS to have more value than to be used for a salary dump. A package of Bradley and Bogans' expiring should be able to net you a nice haul, not just an expiring contract. Even if the team doesn't want to re-sign Bradley or another team makes him an offer they don't want to match, they can simply let him go in the offseason and still save cap space with Bradley leaving and Bogans either getting waived or traded.

The only trade for Marion that makes sense for Boston is unloading the albatross of a contract that is Jeff Green, but, as already stated, Dallas doesn't want any part of that headache either.