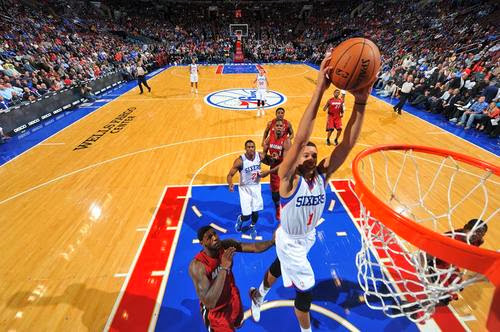 The 76ers come in having lost three in a row after narrowly defeating the Celts in Boston on January 29th 95-94. Rajon Rondo did not play and the Celtics had 18 turnovers to Philly's 10 in that game.

Although, the 76ers are one of the worst teams in the league they do have a couple of bright spots in rookie point guard Michael Carter Williams and Ohio State product Evan Turner.

Carter Willaims is one of the leading candidates for rookie of the year honors and sits atop the current Kia NBA Rookie Ladder:

Carter-Williams missed a game this week as a precaution after bumping his shoulder on a screen, then almost missed the Sixers' loss in Brooklyn after dealing with a personal matter in Boston and getting stuck in the snow. MCW still finished with 21 points in the loss, and finished January averaging 16.5 points, 5.6 rebounds and 5.6 assists, numbers which should yield him Player of the Month honors.

For the season, MCW is averaging 17.3 points, 6.6 assists and 5.4 rebounds even though he has shot the ball at just above a 40 percent clip.

With his surprising success (he was drafted 11th overall) and the reemergence of Brooklyn's Shaun Livingston it should be interesting to see where Australia's Dante Exum falls in the draft because 6'6 point guards should be in high demand.

The other bright spot has been Evan Turner who is averaging just under 18 points and hit a difficult runner at the buzzer to beat Boston six days ago.

Turner, however, may not be with the Sixers long as Philadelphia continues to position themsleves for the future.

Some people even believe Philly might have a chance in the Lebron James free agency sweepstakes this summer.

Remember, a few weeks back, LeBron said that he thinks the Sixers 'got a good one' in Michael Carter-Williams.

On the flip side, The Celts are coming off a morale boosting win against Orlando and Rajon Rondo had his best game since coming back.

Sully also had a stellar 21 and 12 in that contest.

Rondo has another great game as his competitive fires come out and he takes it to the rookie Michael Carter Williams.

Leave your own thoughts and predictions on the game in the comments below.