Trade Mailbag: Could Evan Turner, Larry Sanders or Gordon Hayward be targets for the Celtics? 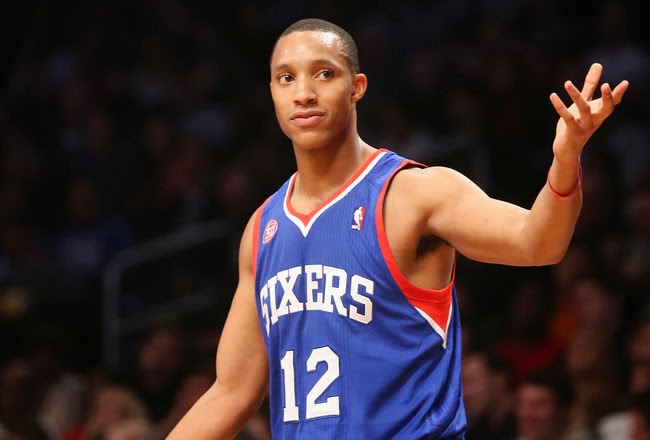 Yesterday we asked you guys on twitter to give us some questions for our CelticsLife Live episode with Sean Deveney, and predictably a lot of you wanted to know if specific trade scenarios would work for the Celtics. I say predictably because of the Cs current situation. When you combine their record (not so good), their GM ("trader Danny"), and the upcoming NBA trade deadline (only 16 days away), why wouldn't we all have trade scenarios on the mind?

Sean and I discussed the scenarios a bit, but I figured it was worth an additional breakdown here.

Let's get right to it.

@CelticsLife Green and a first rounder for Evan Turner seem like a possible idea? If so would we benefit?
— Keith Burt (@KeithBurt95) February 3, 2014

Evan Turner is a guy who there will be a ton of rumors about over the next few weeks, as the Sixers have basically announced to the world that he's available for the right price. Part of that price is a first round pick, which Keith did include in his hypothetical deal. But the other part of that price is salary cap relief, as Philadelphia is not interested in giving Turner an extension this summer and certainly wouldn't be interested in paying Green $9 million in both 2014-15 and 2015-16.

The Sixers are in complete teardown mode, starting with their trade of Jrue Holiday last summer, and likely continuing with trades of Turner and Thaddeus Young in the coming months. But any conversation that starts with Philly taking on a bad contract (such as Green) is going to end with them hanging up the phone soon thereafter. Unless maybe the Celtics made the first round pick their own first rounder this season — but that would be an incredibly stupid move by Ainge.

If the Celtics really wanted Turner, the deal would more likely be structured around stay at home dad guard Keith Bogans and his expiring salary (well, non-gauranteed next season, but same difference) plus a first round pick (to balance the salaries the Celts would need to throw in another minimum salary guy, likely Phil Pressey). But this is pretty unlikely unless the Celtics view Turner as the type of guy they want to give $8-10M/season this summer, the likely price it will take to retain him.

@CelticsLife @SeanDeveney what would it take to get Gordon Hayward? Should we? Would he re-sign in Boston?
— Danny Breakdown (@danny_breakdown) February 3, 2014

We've talked about Gordon Hayward before, and for good reason. Brad Stevens recruited Hayward and then coached him for two seasons at Butler, nearly winning the 2010 National title together on a half court heave by Hayward against Duke. Four years later, Hayward is ready to cash in as a restricted free agent, and the links to Stevens and the Celtics have been persistent.

But trading for him is going to be a hassle. Utah offered him somewhere in the area of a 4 year, $48 million before this season, and that was before Hayward took major steps forward as an all-around player. While he's having the worst shooting season of his career, he has a five year track record (college + pro) of being a very good shooter. The improvements he's shown as a rebounder, distributor and on defense show his growth as a player, and likely will raise his price tag this summer.

And considering the Jazz can match any deal, they will likely do so to retain Hayward, unless they're blown away with an offer, either before the trade deadline or during the summer as part of a sign-and-trade.

So what would blow them away? Well, if Hayward leaves their holes would be at shooting guard and small forward, making Avery Bradley a likely fit. But Hayward is a more valuable player than Bradley, meaning the Celtics would probably have to sweeten the pot with a first round pick. Something like Bradley + a protected 2015 1st rounder would at least make Utah think about pulling the trigger, but even that may not be enough.

As much as I like Hayward, I'm not sure the overall price to the Celtics (both to get him and then retain him) would be worth it to the franchise. Bradley will be cheaper to sign and is a much better defender, plus, he's already here and wouldn't cost anything to acquire.

@CelticsLife @SeanDeveney I want to ask whether trading for Larry sanders would be a good idea, Jeff and Bass for Sanders maybe?
— Carleton (@BigCarleton) February 3, 2014

We've also spoke about Larry Sanders before, but just to refresh: Sanders has a 4 year, $44 million extension that kicks in next season which complicates any deal for him quite a bit. Here's a passage from what I wrote about his contract back in December.

Sanders is really, really difficult to trade in the trade machine. It's a poison pill provision for any team looking to trade for him, meaning the Bucks would be trading him at his $3 million salary for this season, but the Celtics would be receiving him at his average annual salary throughout the course of his contract ($47 million over 5 years = $9.4 AAS). So Milwaukee is trading Sanders as a $3 million player, but Boston is receiving him as a $9.4 million guy.

I'm a big fan of Sanders, but once again, the chips are stacked against a trade. The financial oddities of the deal make it tough to work out a deal before the new league year starts in July, and then there's the matter of paying Sanders $11M/season for the next four years. Is he a really good defensive center and the type of guy you want as the backbone of your D? Absolutely. But he's also raw offensively and incredibly immature, which makes it a risky proposition to pay him eight figures per season until 2018. Also, as Sean brought up on CLL, if the Bucks are that willing to move him only six months after signing him to an extension..shouldn't that make you stop and think a little bit?

While any deal for Sanders is unlikely, the one proposed by Big Carleton is completely far fetched (Green + Bass for Sanders). First of all, because of the financial aspects of the deal just don't work. And secondly, because Milwaukee is in the middle of a rebuild, and paying Green and Bass a combined $15 million next season is a pretty terrible way to rebuild. The Bucks would be looking to dump salary (guys like Zaza Pachulia and OJ Mayo) and pick up an asset in any deal. Bass and Green accomplish neither of those things.

@CelticsLife do you think it's possible for boston 2 trade green and bass to phoenix for okafor and a 1st rounder at the deadline?
— david (@david5453_david) February 3, 2014

Is this specific trade possible? No, unfortunately not. Phoenix is a smart organization, run by former Celtics assistant GM Ryan McDonough, and picking up $15 million worth of Bass/Green is not something they're going to do with Eric Bledsoe ready to get a max level extension this summer.

But, the Suns are reportedly looking to move the combination of Okafor's expiring deal and one of their four first round picks for immediate help, so the Celtics could try a few different possibilities to make that happen that don't handicap Phoenix's books going forward.

#1. Kris Humphries for Okafor and the Pacers first round pick

This one would give the Suns something they badly need (rebounding) plus it wouldn't hinder their ability to sign Bledsoe. In exchange the Celtics would get the weakest of the Suns' four first rounders, but still a valuable pick at the end of the first round.

I really wanted this to be Bogans + Bass only, but the deal needed an extra $2,000 (seriously, that little) to work financially, hence Pressey being thrown in. In this deal the Suns get Bass, who would help them out a lot defensively, and Bogans' semi-valuable un-guaranteed contract for next season.

The Suns would need to be willing to take on Bass' $6.9 million price tag next season, but we just saw the Grizzlies take on Courtney Lee's $5.5 million deal, so it's certainly conceivable that a team would take Bass as well. As for the Celtics getting a first rounder in this deal..it's not happening. Bass makes the Suns a better team this season, at the price of paying him next year as well (when he will still be a solid contributor). But there's no way they're taking on his salary and giving up a first rounder.

As for Jeff Green heading to the desert — don't count on it. The Suns have another Green at the small forward currently outplaying Uncle Jeff for about a third of the price in former Celtics' great Gerald Green. So it just doesn't make a ton of sense for Phoenix to take Green off the Celtics' hands for them.

Ok, that's it for this edition of the trade mailbag. Hopefully we can do another one soon as I know I love talking deals, and so do many of you. Now let's just hope Ainge has another trade or two up his sleeve before the 20th.

Here's the CL Live episode where Sean and I discussed these deals and more. (Trade stuff starts right around 27:00)