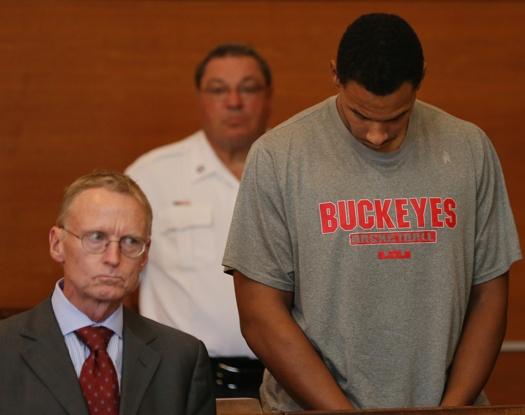 Celtics forward Jared Sullinger has issued an apology after he pleaded not guilty to assaulting his girlfriend during an incident Saturday.

I voluntarily reported to the Waltham police this morning to respond to charges against me,” Sullinger said in the statement. “The experience was humbling and embarrassing for me. Yet I know that this situation has brought both sorrow and embarrassment to my girlfriend, my family, the Boston Celtics organization, my teammates, and my fans. To all of you, I apologize from the bottom of my heart.

“My lawyers have advised me not to discuss the case at this time. But I wanted to immediately and publicly apologize to everyone affected by this situation.

While it's nice for Sully to get out in front of this, I've never been a fan of prepared statements. Of course he has to cover himself legally and can't get into too much detail. But it would have seemed more sincere had he done it in front of cameras. Sully could have just as easily said he couldn't say much in front of reporters, but it would show what emotions, if any, he has concerning the charges. Instead we are left with a courtroom shot and words on a screen.

Sully looked to be one of the emerging locker room leaders for Boston with the departure of Kevin Garnett and Paul Pierce and time will tell if this incident will harm his presence in any way. While the facts of the case don't sound too egregious, domestic violence is never something to be taken lightly. Hopefully Sully will work this out with counseling and this will only be a speed bump in his life instead of a red flag of issues to come.