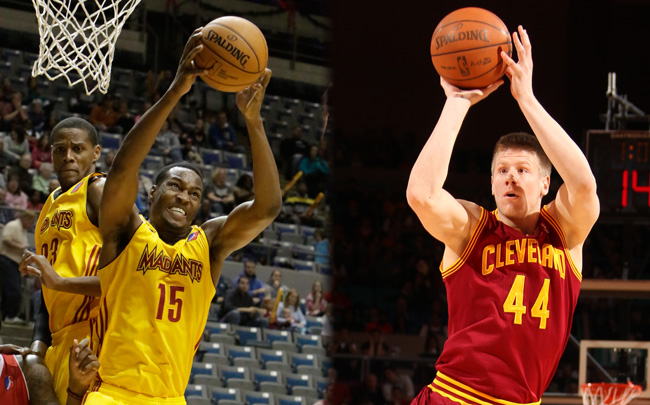 In a rare D-League trade, two recent Celtics, JaJuan Johnson and Luke Harangody, have been traded for each other.


The Charge acquired former Purdue big man JaJuan Johnson on Friday, and they used an old friend to do it.

“JaJuan is a very good player,” said Mike Gansey, director of development league operations for the Cavs, who own and operate the Charge. “He’s hurt us a lot when we’ve played him. We thought this was the best move for us right now going forward. Also, to get a first-round draft pick (next season) is rare.”

The 6-foot-10, 208-pound Johnson, a long-armed forward/center who likes to step out and shoot jumpers rather then bang down low, averaged 13.2 points on 39.7-percent shooting in 13 games for the Mad Ants. He also averaged 8.9 rebounds and 2.2 blocks while registering five double-doubles.

“A big guy that can shoot, there’s not a lot of them,” Charge head coach Alex Jensen said. “And with his length, he can affect a lot of things inside.”

Harangody was released by the Cavaliers earlier this season to make room for the signing of the Charge’s Kevin Jones. Harangody played in 16 games for the Charge last season while on assignment from the Cavaliers. He averaged 19.4 points and 12.6 rebounds for Canton.

In case you're wondering no NBA team owns either of these players' rights, but Johnson can not re-sign with the Celtics until next Summer due to NBA rules re-signing players a team recently traded (JJJ was part of the Courtney Lee trade). My guess is that even if the C's could re-sign JJJ they'd pass as he's not that good (as seen by the fact that the Rockets dumped him and no other NBA team has given him a shot). Harangody I could see being a solid D-League or overseas player, but is just a little bit too short and unathletic to succeed in the NBA. Now if you combined Johnson and Luke you might have a pretty decent NBA player.