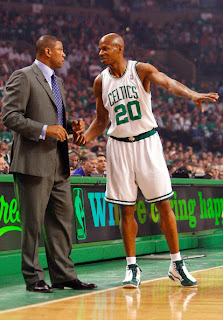 “I’ll always be disappointed with that because of the way it went down. But it is what it is, so I’m over it, but, you know, you’re always disappointed about stuff."


Coach Rivers goes on to say:

"But as far as our team, I moved on the next day. We were trying to build our team. We already had Jason Terry; we knew that. So my next move was Courtney (Lee).”


If last night's game is any indication, the C's head coach has nothing to worry about. Lee posted his best stat line in Boston so far, dropping 18 points on 8-12 shooting, along with 4 boards and 4 steals in 33 minutes.

And it looks like Ray's 3-point shooting may not be missed, as Jason Terry went 5-5 from beyond the arc in 22 minutes of action (coincidentally Allen also played 22 minutes off the bench last night, and also put up 5 threes. He made one). Not to mention the fact that Paul Pierce has shown a renewed proficiency from long range; the Captain hit all 4 of his attempts yesterday, and was 6 of 8 from downtown the game before.