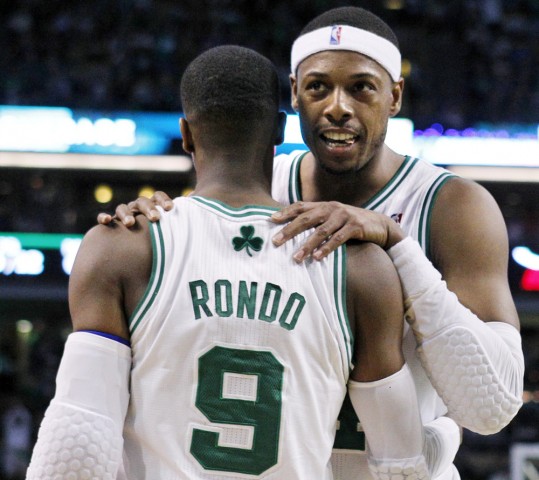 We're a week away from the NBA trade deadline, so expect to hear several rumors (and denials) in the coming days. Today Chad Ford and Ken Berger threw out trade rumors on Rajon Rondo and Paul Pierce respectively.
Chad Ford on Rondo:

I know the Celtics are saying Rondo isn't going anywhere. But there are two problems with that. (1) It doesn't jibe with what a number of NBA GMs are saying based on conversations they've had with Celtics president Danny Ainge. (2) Ainge isn't stupid. He doesn't want to trade Rondo, but Rondo is the best chip he has to play right now.

If Ainge waits and does nothing, the Celtics will be a middling lottery team without much hope next season -- in the same spot where Ainge inherited them a few years ago. He doesn't want to go back there. If he can get two pieces back for Rondo, I think he'll do it. Atlanta, Portland and Indiana are interesting destinations if they are willing to pay.


The Celtics are prepared to entertain offers for Paul Pierce, whose subtraction from the Boston core would be the most advantageous to the post-Big Three rebuilding effort given his age (34) and the $32 million he's owed over the next two seasons. And for those same reasons, he'll be the most difficult of Boston's top four players to move.

Without trying to get in the brain of Danny Ainge, hypothetically I'm guessing by trading the two players(and contracts) that would remain after this season, Ainge would be clearing the deck to make a sales pitch for the Dwight Howard/ Deron Williams combo. One could argue that players like Josh Smith and Paul George might fit better with that free agent combo. More likely, Ainge is just trying to rebuild from scratch and like I assumed his declarations that he's not shopping Rondo were just some hot air to attempt to bump Rondo's trade value back up.

Also keep in mind that Ford and Berger get paid to toss out rumors, so if there's the tiniest amount of smoke they'll run with it. Most likely nothing will come of the rumors. But for the next week just be aware that no one is safe on this roster. Stay tuned.