Poll: Will Big Baby Get a "Welcome Back" Video When the Celtics Play the Magic on Monday? 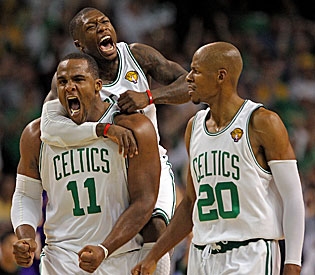 On Monday January 23rd, Glen "Big Baby" Davis will make his return to Boston for the first time since being traded to the Magic. But will Baby's return garner a tribute video, similar to the "Welcome Back Perk" piece that graced the TD Garden Jumbotron at the Martin Luther King day match between Oklahoma City and Boston?

Davis was not a starter like Perkins, but they both spent their entire NBA careers with the Celtics up until the time they were traded. Last year, Baby was a 6th Man of the Year candidate, and was one of the league's leaders in charges taken. But he left many fans with a bitter taste in their mouths as his performance fell off towards the end of the year, and his attitude was also a turn-off to many.

Regardless, I feel as though Big Baby is deserving of some sort of acknowledgement for his time in Boston when he returns next week. Even in games when both he and Perkins were still donning green, Doc would often play Baby instead of Perkins at center during crunch time because of his ability to score. There are so many memorable moments that tie Glen Davis to the Boston franchise. Moments like the "Shrek and Donkey" game against the Lakers in the 2010 finals where Baby and Nate were electric. Moments like his game-winning three point shot against the Magic in the 2009 playoffs when KG was sidelined with injury. And of course, there were all of his off-court shenanigans, but that is what made him Big Baby.

The Celtics have been pretty dedicated as of late to paying tribute to their past players and coaches. Even Tom Thibodeau and Brian Scalabrine were honored last season when the Bulls visited the TD Garden. So what do you think? Will Big Baby get a tribute video at next week's game against Orlando? Vote in the poll below.